I'm not talking about the nuts in my family and there are a few but I think we all have them. Some are just peanuts, bland and not roasted and some are the cashews, salted, roasted and have a bit of a curve to them. In the end, they're all nuts and we are glad we see them on certain events and glad when we can say, " Adios!" and travel home to our other family.....the furry kind.

This is a story of a wacky lady who had no girls with golden curls and was so happy to have dodged that bullet. One day this whack-a-doodle met this ADHD fella and they knew it was much more than a hunch. So when they got together, they ended up being the wack-a-doodle  family with some fur nuts.

The first one came with the hubby. He( the cat not the hubby) was a tiny thing who fit in the palm of my hubby's hand and he named the cat, Maddie, after his niece who pleaded with him to take the cat. Hubby took the cat that grew into a huge male cat so the name changed to Naddie.  Naddie likes to hang out and not be bothered much and especially loves the outdoors. He loves it so much that, when he has to come inside, hubby has to throw a blanket on him to make sure his blood stays inside his body. This cat has a big red sticker beside his name at the vet because Naddie likes a pound of flesh.

Now you think he is all male, but I think he has a little Bruce Jenner, er, Caitlyn Jenner in him because he is the biggest whiner I have ever heard. He whines for his food and can't even give a good hearty meow. He does more a "Meh" sound...constantly! I wish that cat would meow like he's supposed to but nope, he just "mehs"  unless he is sleeping. He lets us know when his kitty litter needs changing because he decides to crap outside  the box...anywhere he feels like it. In fact, he will do this if there is  just one crap in his huge litter box. The litter box was built by my hubby who never thinks small.....it's the size of a small football field.  Anyway, gender-bender Naddie  is a big softie who can tear a strip off you if he so chooses but is often just laying around looking bored.

Name: Naddie
Age: 11 years
Nickname: Naddiekins, Whiner, Faggy-Waggy
Loves: Sleeping, The outside on a leash), Hanging around, Being petted by your foot, Whining, ignoring you
Favourite friend: Lucy
Favourite Food: Eating his and then trying to have the other cats' food 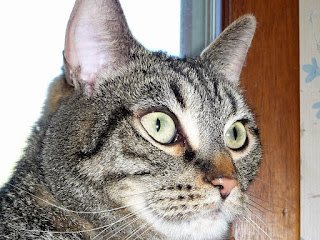 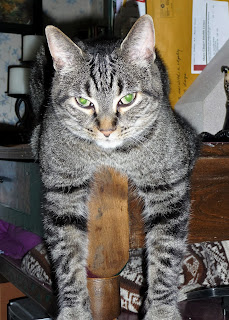 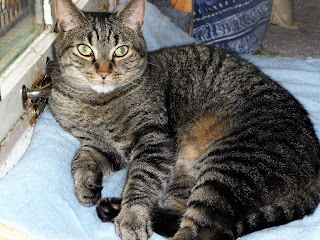 I have made cards but I haven't downloaded them besides, I haven't written about whatever for a while and so I thought I would start off with my family. Yes, they purr and bark but I like that more than crying and, (Blecchhh) a face full of cake. Ick... So who is going to watch the comedy special starring the Pantsuit and Orange nut??