I'm a bit late.....bad pain but I am still posting about our next in line pussy cat. This is our adorable Jade who is named after my wonderful niece. We got Jade before we got Mia but she is younger so that's why she is the fourth post in my family saga of fur babes.

We first heard about our cat, Jade, when we read a story about a cat that was left behind by university students in their former apartment. The cat was left to die which is disgusting and just shows that there should be more rules before anyone can adopt. We called about this cat but she was already adopted out but that is when we heard about a group of kittens also left behind by students. The kittens were so starved for food that they were eating crayons!  My hubby jumped at the chance to rescue one of these and he named her Jade after my niece. A few days later, a lady from the cat rescue place brought her to us and we just fell in love.

She is our lover....she loves and loves and loves. Now Naddie and Lucy looked at her and wanted nothing to do with her...Naddie just walked away but Lucy would hiss at poor Jade. Jade took instantly to...Katie, my wonderful black lab who would lick her but only when I was not looking. If I was looking at the 2 of them, Katie would feign disinterest which made me laugh. Jade never cared, she would lick Katie and then sit beside her.  Jade also loves hugs and being snuggled so she always climbs up on us when we are watching tv and head butts us for about 5 minutes and then proceeds to licks us with her sand paper tongue. She often will sit on my hubby, either his chest or his legs and feel very much at home. He can't move for the rest of the night otherwise it would disturb her:). When Katie passed away, she was lost and would go to Katie's bed and sniff it and meow and then lay down in the middle of it. Jade got better and moved on To Wallace our current phobic dog. She will lick and lick and lick him which he loves and you know that those 2 did some porn which I wrote about quite a while ago.

The one thing she does which irritates us are her claws. When you pick her up she comes right to you to snuggle but she puts her claws into you so deep you realize she might be an S & M cat. She has ruined a few sweaters and tops of mine by pulling the strings on the shoulder of my clothing and embedding her claws into my skin. She also loves to sleep on top of my chest in the morning since she is hungry and is awaiting her tuna. She is our sweetie pie...

NAME-Jade
AGE: 8 years
NICKNAME- Jay-Jade, little one, muess-muess, snookums, Sandpaper Sally
LOVES- Wallace, licking everyone and then batting them with her  paw, tuna, tuna, tuna. Sitting in boxes, under trees, in bags...
TOYS- not much...just wants to snuggle 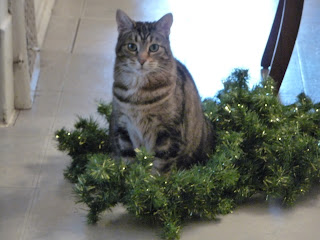 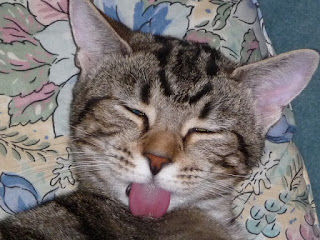 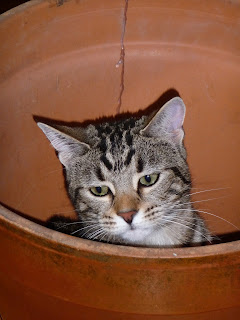