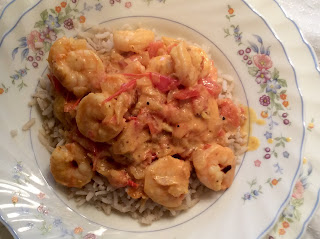 This past weekend I found my inner June Cleaver and stayed in the kitchen. I don't know what happened to me but I think I entered the Twilight Zone because I am not known to love the kitchen when I could be, well, anywhere else. I decided to make a recipe I saw at Jo's blog, who posts a recipe everyday after she talks about whatever interests her. She is a lovely lady who writes about her love for bowling, the Mandarin and her take on global events...and lest we not forget her love for asparagus (Yuck):) I decided to try the coconut shrimp curry recipe which takes many spices so off to the bulk barn I went. The recipe is pretty easy to follow but it took me much longer than the 25 minutes given. In the end, it was delicious! I love the taste of curry and turmeric along with coconut milk and could easily add scallops and other shellfish to this dish. Now, you might love the picture above or...you might not, but this dish was delish! 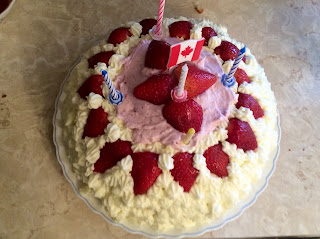 My brother's birthday was on Sunday and we invited him over for a BBQ and a mini celebration. I decided to make a cake for him that he has not had since my mom got dementia. It is not so much the cake but the icing which is a lemon flavour. I took lemon pie filling and added a 1/4 cup cold water and 1 3/4 hot water to the lemon filling-omit eggs and milk but follow the rest of the directions which is basically keep stirring the stuff in the pot on the stove until it thickens and starts to boil. Take it off the hot plate and let it cool but stir it so no skin forms. When it cools down, cover it with Saran Wrap and place it in the fridge. Take a whole Pint of whipping cream, add a 1/4 cup icing sugar and whip it until stiff peaks form. Take out the lemon filling and slowly add it to the whipped cream and whip it good. This is the icing and it is gooooooddd! I cut the cake twice so you have 2 layers. The first layer will hold some of this icing, place the middle part of the cake on and take raspberry jam and place it on the second layer. Place the top layer down and decorate it with the remaining icing. My brother loved the cake.

Now while making this cake I went insane and started taking everything out of one cupboard which holds all the spices and baking supplies. I had some spices that my mom had ....when I was 10! I don't think marjoram will last 43 years so a lot went out and now the cupboard is much, much better and when I open the door, nothing falls out since it was jammed full of old crap.

Oh, I place some whipping cream aside and folded in some raspberry jam because I had the bright idea to write Happy Birthday with the pink icing. I did not count on those nasty, nasty little F'en seeds to get stuck in the pint sized nozzle. After trying to dislodge the seeds with a toothpick, using curse words that a lumberjack would blush at, and having blobs of pink icing everywhere, i gave up and just placed the icing in the middle. 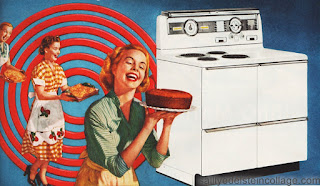