Hi everyone.....I'm now sick so I can't see my mom. We had a brief scare yesterday as she was sent back to the hospital, but they did the tests and she is aok and back at her home. I think, due to her difficult breathing, she will soon be in a wheelchair. It is too difficult for her to walk down the long hall to her room. The good news is that someone does exercises everyday with the people.

I have read some experiences people have had with animals and thought I would add my own. This took place back in the 80's ...I think the late 80's but my memory is turning menopausal. My brother's first wife started a garden and after a year, stopped, so I decided to take it over. The first year went well except for my mom stealing all the lettuce leaves. I thought it was a rabbit or a deer but I caught my mom who was the true varmint. I covered the garden with an old pool tarp so I would have little weed pulling the next spring.

That spring, I put my rubber boots on, my garden hat and went out to start the garden. I started to take the tarp away when I heard this swishing sound. My curiosity was aroused and I moved the tarp again and saw something move underneath it. I was hooked and felt like I was in some jungle ready to find some rare animal. I pulled the tarp back and there lay this large black ugly snake. It was fat and it was long, I would say it was about 5 ft...I'm not kidding. I had never seen it before but I knew one thing...it was ugly. I was used to garter snakes but this was no garter snake.

Did I run? Oh no, I was thinking I was Marlin Perkins from Mutual of Omaha's Wild Kingdomor rather Jim, the poor doofus who always did the hard crap. I took my rake and started to push the snake, let's call him Herman, to see what the snake would do. Can we say "Dumb Ass!" I nudged Herman again who suddenly, reared his head in an upright position looking at me. Now I, let's call me idiot, thought I was far enough back (I was) that he can't strike me so I nudged poor Herman again. Quicker than you can say blonde bimbo idiot, he struck so fast that any notion of working with anything wild evaporated.

I ran, with my arms and hands outstretched like the blonde twit that I am, my rubber boots almost falling off, towards the house, got inside and breathed a sigh of relief. I escaped Herman and his unhappy view of this blonde idiot. I called my neighbour who came with his tractor and looked all around but Herman was gone. I had never seen this type of snake before or after but my ex, who is a snake lover, said it was probably a rat snake since we had a creek behind our home. 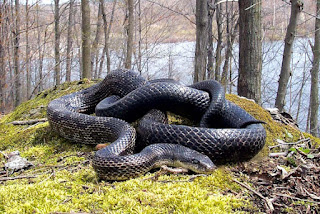