Some More Cards on a Cheerful Day 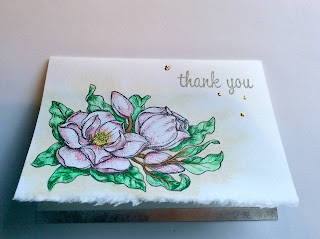 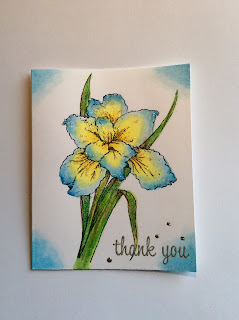 Both of these stamps are at least 5 years old and I used these to make thank You cards for the people who contributed to the Alzheimer's Association or the Veteran's Affairs since my mom was a big supporter of the men who fought in any war. My mom's celebration of Life was really quite beautiful and I was so very happy with the turn out. My brother's boss was there with his wife throughout the whole service but my boss never even showed his sad face. For that I have not really spoken to him at all and will express my disappointment in the annual review. I feel I must tell him that his no show was dead wrong! He is retiring in July and has no care any more but that is no excuse in my book.

Anyhoo, I made 20 cards using these images to send to the people who gave or sent us flowers and to my dearest friends as well. They were stamped on basic white cardstock and coloured with prisma colours. I used the gamsol to blend the colours together, added the Thank You stamp which I embossed in silver pearl and added some stickles since my mom loved glitter just like me.

I found out from the others that my boss had his 45th or 50th wedding anniversary that day. My fellow co-workers(just 2 of them) thought I knew because he told them that he felt bad he couldn't go but he never said a thing to me! Yesterday,  I told him what I found out and that I was sad and disappointed but now understand why he didn't attend. Mr. Emotion said he couldn't attend because of the anniversary and was looking down and said he would have been there. ...sigh. It was sticking in my craw so I had to speak up.