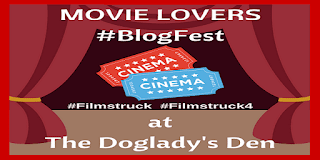 Answer this question: What four films define you? Describe how and include a brief outline and trailer for each movie.

Of course I will enter this fun event which is up until August 31st  and it would be fun if you would partake in this venture involving movies. You can head on over to The Doglady's Den to read more about this and post your own films that mean a lot  to you. I will write little snippets about my life and then talk about the film. I don't mind revealing aspects of my darker past because this is what gives a person strength and character. On with the show...5 films:)

"Shhhhh....don't squirm or I will hurt you. You are not worth anything, that's why nobody talks to you, no one will care if you are gone. If you keep squirming I will cut your throat from ear to ear."  I didn't care anymore and felt so confused so when I yelled out to cut my throat he switched things up..."See your brother over there? If you don't stop moving, I will drown him. I know your parents don't lock the doors so I will come here and cut their throats." I stopped moving and let things happen, what was a 7 year old to do? Escape is good...

The classic boy meets girl, boy loses girl and boy gets girl back but what a fun movie with not only great dancing but some very funny moments from Edward Everett Horton, Helen Broderick and Eric Blore. The classic case of misunderstandings are brought to you with the charm of Ginger who can't seem to keep away from Fred. She finally succumbs with this classic routine in all its sensual glory. How I wanted to wear this dress which Fred Astaire hated due to the feathers flying around.

Escape into laughter, which is the best medicine and I love this film to this day.
When life gets tough, who doesn't need a little escape and laughter is always needed. This brilliant screwball comedy stars Barbra Streisand as a carefree forever student, carrying her plaid bag who meets Steve..I mean, Howard, played by Ryan O'Neal. He has come to San Francisco, with his fiancee, Eunice Burns (brilliantly played by Madeline Kahn in her first role) to attend a convention and hopefully obtain a grant for his igneous rock formations held in a plaid bag. There are 2 other plaid bags floating around the hotel with one containing top secret documents and the other priceless jewels. Mahem ensues with a car chase to beat all car chases.

By the way, I told my mom and she told me what to do and hugged me and promised me never to tell my dad because I didn't want my dad to end up in prison for murder. She told the man never ever to come back. I can't stand looking at my communion photos to this day (he took the pics) and there is one moment where this man led me to his apartment and all I remember is walking back with him to my mom's friend's house. The brain protects...

High School.....spat on, told to wear a paper bag as I was too ugly, sandwiches thrown at my head, laughed at. Told I am worthless, my parents would be better off without me, the whole world would be in fact. Tripped in the hallways but worse, they would always try to break my fingers on my right hand so every year, my mom took me to the hospital but no broken bones, just a swelled up hand. Who knew I had Ehlers-Danlos and could not break a bone since I was so hyper-mobile. Fear that I would be killed since a group came from behind, grabbed my throat and raised me up telling me they will cut my throat from ear to ear. I had heard this before so I went within but I still walked outside on my own to show no fear. High school sucked...

When I saw this film, I cried and so wished for a bodyguard of my own. The young man is new in school who is picked on by the gang who exhorts money from the kids. The young boy, played by Chris Makepeace tries to fight for his rights but it doesn't go according to plan. He ends up hiring the big kid everyone is scared of as his own bodyguard which works and they slowly form a friendship. My favourite is Ruth Gordon who plays the young boy's grandmother, a feisty gal who helps the troubled bodyguard and you know she has seen her bullies as she has the tattoo on her arm to prove it.

There is always hope.. and I had an angel walking beside me through hell, who never gave up on me..my mom. My dad was there and I always felt safe and both instilled in me that hope should never be underestimated. Strength comes from within and you can do anything if you want it bad enough. I believe in this strongly...

Another film I adore and believe in what it stands for. I know it is different from the book but I don't care. It stars Tim Robbins(who should have won the Oscar) as Andy Dufresne wrongly convicted to life imprisonment for the murder of his wife and her lover. In prison he meets Red, played by Morgan Freeman, who becomes his best friend. Andy must endure rape, bullying and the warden because the warden uses Andy's skills to embezzle big time. You see how this man quietly defies the guards and the warden while gaining the respect of the prisoners. Over the decades, we see his likes in posters change from Rita Hayworth to Marilyn Monroe and, finally Raquel "fur bikini" Welch. When nothing seems to go your way, there is always hope.

Through my years of facing death in the face either by bullies, offenders, or my parents' passing, dealing with health issues, losing the home I grew up in because of my one Uncle (that's another story), pain and other crap, I have always felt that life is a precious gift that should never be taken for granted. It is not easy and I had a very, very low point when I was in Grade 12 but, as my mom said, "In the morning, you always hear the birds sing." Life is truly beautiful, I get to help people, I am here for my friends, beauty resides in flowers, art and the written word which I see on the blogs I follow every day. My Mantra is...It's a Wonderful Life.

This film, about a man who never leaves Bedford Falls, helps everyone he can and fights the evil that can lurk in the most serene of places, makes me cry every single time I watch it at Christmas. James Stewart, my favourite actor, plays George Bailey who fights to leave the town and people and see the world but is always stopped by something/someone because he knows what is the right thing to do not what he wants to do. When all seems hopeless and he contemplates suicide, his guardian angel steps in and shows him what life would be like if he were never born. Have you ever stopped to think what it would be like if you were never born? I have promised always to do my best to help my friends, family and people I see in my work. When people fight you and no one believes you, this is when it is most important to stick to what is right. This film is a part of my heart and I hope I am not a failure because, as Clarence wrote in the Tom Sawyer book, "No man is a failure who has friends."

I hope you enjoyed my lengthy post that might have been too much info but..oh well:) Keep smiling and smell the roses. let's see if you want to join or say which films define you.
Posted by Birgit at 6/26/2018