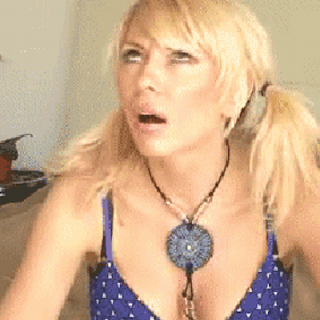 Over at Wandering Through The Shelves, they have the TV Edition and one is to pick 3 shows that are non-English. hence my look above..OK that really is not me but the same expression was on my face.  I think I popped a few brain cells to boot and I need to keep them since I drowned quite a few in my drinking youth days.

I decided to talk about a film...yup one since I do watch many in a month I knew I could give my 2 cents worth. So the film I chose is....

This is about the life of P.T. Barnum of "Never give a sucker an even break" fame. We see him as a small boy to a down on his luck, every man loved by a woman who gave up her fortune to be with him and have a few kids to boot. Poor, but with a vision, he starts a museum about weird oddities with little success until he brings in real life oddities or, as they were called in the day, Freaks starting with Tom Thumb and the Bearded Lady. Before he knows it, he is rolling in the mulah but he is still considered low brow so he fetches the beautiful, talented opera singer from Europe, Jenny Lind to appeal to the cultured but losing sight of his family-both his wife and kids and his family of "oddities".

This is an excellent film and should have been up for Best Picture instead of Shape of Water which won and Dunkirk(blecchhh-I'll get heat for that:)) because it has more depth than those 2 films and it is better directed. The music is stellar which is why I have no idea why it was not nominated for best Score, plus Art Direction and Costumes. Shape of Water was nominated in both areas and I just don't get it. So what if "Shape of Water" was filmed and shown in greens and has a under water, icky look. This film is much better in both areas. The singing is superb but I will say that the director and cameraman should learn from what Fred Astaire insisted on...to film the musical number in full length. It is always distracting to get into a dance number only for the camera angle to change to a close up of their feet or face or just another angle. Please keep the shot where it should be. I know Arlee Bird loves this film which made me finally watch it and I am glad I did. If you care to listen I have the song, "This Is Me" that I think, should have won the Oscar up against "Remember Me" from Coco that did win. You choose which song should have won and before you listen, do you recall either because I can remember the song from The Greatest Stuntman but can't remember the song...hahahaaa.."Remember Me"... I don't! Take a listen...


Unless you dislike musicals (Shady), I recommend this film and Hugh is always nice on the eyes.
Posted by Birgit at 3/28/2019