It is a Wonderful Life 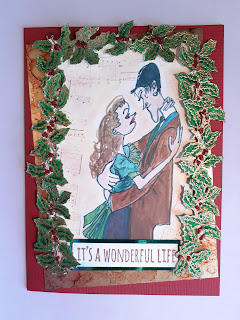 Gold shine paper, alcohol inks, holly stamp, gold embossing powder, saying stamp, bronze dye ink and clear embossing powder, markers, dark red stickles, wink of Stella clear glitter brush
ABC Christmas- L is for Love and M is for Movies
Addicted to Stamps-Holiday
Sparkles Monthly-Use a real stamp
I love Al Hirschfeld and always dreamed of being drawn by him. He was a great artist that depicted many actors, films, theatre and TV in his almost 100 years on this earth before passing away. So when I saw the challenge of love and movies, I was hoping I would find  his take on my favourite film, “It’s A Wonderful Life. I found it on the computer and then drew it by looking at his drawing. I don’t do it justice but I am still happy with the result and found this film shows one of the most romantic and sexy moments in Jimmy Stewart’s film career, you wouldn’t think so but it is. After drawing it, I coloured it with markers and used pastels to created the background and added some musical notes since they did sing “Buffalo Bill, won’t you come out tonight.” I stamped the holly stamp in gold and embossed it in gold powder. I coloured it with markers and fussy cut it out before I cut it to make the edges. I took a gold glossy cardstock and used a couple of alcohol inks to create the marble look before adhering it to the red paper. I layered everything and used pop up dots for the holly. I finished it off with the saying, added the stickles for the red berries and the wink of Stella to create a subtle sparkle on the leaves. With everything going on, we forget that we really do have a wonderful life.
Here is his caricature of what I drew from. I thought it would be nice to add this. 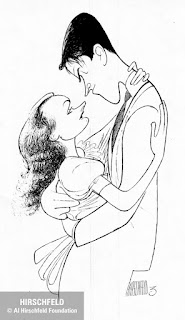