Cards have gone to the Birds plus a Fairy Herald 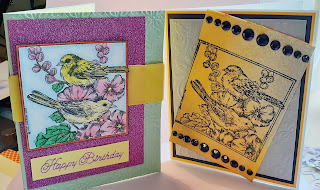 My double look of birds in 2 different ways. The first is obviously for a birthday (my hubby's Aunt) but the second I thought could be used for anything even a sympathy card. 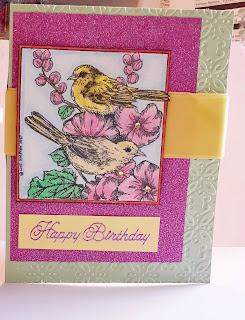 Alphabet Challenge- Use "happy" in a sentiment

Yellow and pink seem to go well. I coloured the birds in yellow and the flowers in pink using my gamsol colour pencils. I used the cuddlebug for the background paper, added the pink glitter paper plus a nice yellow velvet ribbon I found to create the look. A final touch is the Sentiment that I coloured, with a marker, in pink. 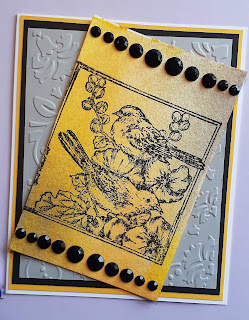 I made this for another challenge that has been and gone but that's ok since it is still a nice card to showcase. I used the same bird stamp but left it uncoloured except for the yellow and grey that comes from the background. The background is sprayed with distress stains and I added water to let it drip down. I took the background grey cardstock and placed it through the cuddlebug for the dry embossed look. I layered different coloured cardstock and finally added the birds but tilted because, I am a bit tilted so it works. As a finishing touch, I added the black gems. 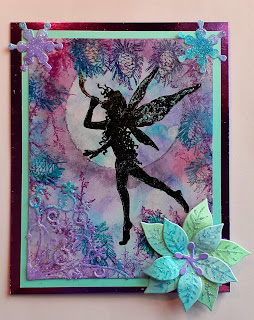 The Fairy & The Unicorn- Anything Goes

The Male Room-Christmas in July

Addicted To Stamps-Use a Die Cut and/or stencil

I had fun creating this mystical card for Christmas. I used a fairy instead of an angel. The background was alcohol pearl inks. I stamped Evergreen and pinecones around in plum. I used my poinsettia diecuts as well as a single  snowflake that I cut out twice plus a filigree snowflake design on the bottom left. That one plus the snowflakes I glittered up. I glued everything in place and added stickles on the poinsettia. I glued it onto turquoise cardstock and magenta mirror cardstock. I think I will add a gem for the middle on the poinsettia....I meant to do that.