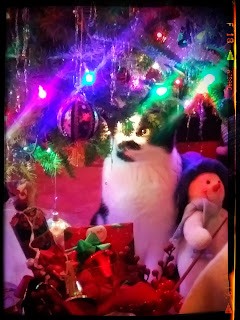 I can’t believe Christmas Eve is this Friday but it is and it will be a wonderful time.. I am going to showcase a few songs I love...I love a lot of them but I wanted to show some I have not talked about before, or at least may have mentioned it only once.
1. O BAMBINO SUNG BY Harry Simone Chorale-1965
I have always loved this song especially this composition done by this  famous Chorale who even appeared on The Ed Sullivan show.. it’s an Italian song, written by Pietro Yon, in 1917. I just always loved listening to this since I was a little kid.
2. A LA NANITA NANA ARRANGED BY NORMAN LUBOFF-1963
I could not find this particular song in this arrangement except from the full album. Yup, I grew up with this and I loved how this lady sings it but couldn’t find out who the singer is. If you can find out, I’d love it. You can listen to the whole album which is a treat but this song is about 33:47 minutes in.  It’s a Spanish Carol by Jose Ramon Gomis in 1904 that many Spanish people now play it as a folk song but I always think of it as a Christmas song.
3. STILL, STILL, STILL SUNG BY IVAN REBROFF 1970
By now you know I love this Mad German who thinks himself more Russian. He has an amazing 5 octave range not 4 which, I think, I mentioned last week. He has such control over his voice not like many, in North America, who scream it.  This carol is Austrian , near Salzburg, from 1865.
4. WALKING IN THE AIR FROM ANDRE RIEU-2014 ALBUM
You know I had to pick something from my mom's boyfriend..as she called him. This song is one of my hubby's favorites and mine too. It actually comes from an animated film from 1982 called " The Snowman" and was written by Howard Blake. I now want to see this special.
Any favourites you have?
Posted by Birgit at 12/22/2021