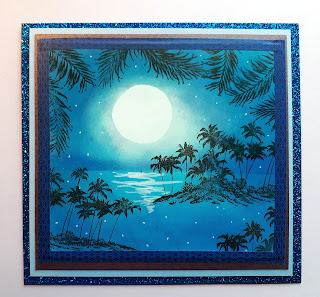 Different blue dye inks,egg shaped sponge, stamps, white pen, different cardstock, washi tape.
Simon Says-Anything Goes
Tic, Tac, Toe Challenge-Used the 3 on the right-Adventure, Beach, Pam Trees tttc074
I had a lot of fun creating this image first building up the blue colours to create this moonlit image. I cut out a circle to make the moon and used the sponge to colour around it plus used a piece of paper to make that horizon line. Once that was done, I stamped different stamps to create that scene that we all wish we could be right now. I finished it off with the white pen to create stars and the moon on the water.  My dear friend, who visited with me last week (did the social distance thing), told me of one of his adventures when he was in Indonesia. He took a tour of some small islands with a few other people on a very rough boat and slept in a hammock on the deck for the 5 nights out in the ocean. He saw beaches in the moonlight that just looked black against the blue, starry night along with the palm trees and remembered how bright the moon was and the stars. This man lives quite the adventure! 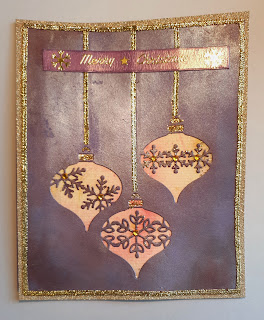 die-cut ornaments, sizzex machine,  perfect pearls, versamark ink stamp, brushes, water spray, colour bursts, saying sticker, ribbon jewels.
Dream Valley-Christmas In July
I took out my ornament die cut and used purple paper to run it through the machine to get this die cut. I had this smple paper I had used color bursts on-you just tap out some powder, very little,  add water and watch the colour just burst out. I used yellow and pink and kept adding and spraying until I got the desired effect. the ornament cardstock was covered with versamark ink and then covered with perfect pearls in a couple of different purples to create a shimmery effect. I spritzed it with water so the colour would not come off onto your fingers. Once the other cardstock was dry, I took the ornament card and glued it onto the colorburst card. I glued that onto a glittery gold cardstock, added ribbon, a card remnant that I placed the Merry Christmas sticker onto it with a couple of snowflakes plus the gems and there is Christmas in July. 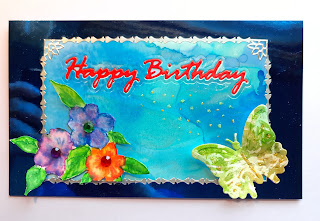 alcohol pearl inks, alcohol(not to drink...hic!), flowers I drew with markers, scissors, butterfly embossed die-cut, Happy Birthday die cut, blue mirror cardstock, stickers, stickles, gems.
Penny Black-In The Garden
Tuesday Throwdown-Favourite Embellishment
I decided to doodle one day just to see if I could create some pretty flowers and leaves using markers and water. I took some glossy cardstock, placed a bunch of alcohol on it and dripped some pearl ink and regular alcohol blue ink onto the card and let it swirl around. Once it was dry, I took my sizzex machine and cut out the Happy Birthday saying in both the blue and an orange cardstock piece I had. I glued that onto the mirror card and took the orange words and glue them in place. I fancy cut the flowers and placed them on using pop up dots. I filled the centre in with my favourite embellishments-gems. Finally I used the machine again to cut out the butterfly and emboss it  on a piece of coloured cardstock remnant I had used for trying out colours. I placed the butterfly down and the stickers. 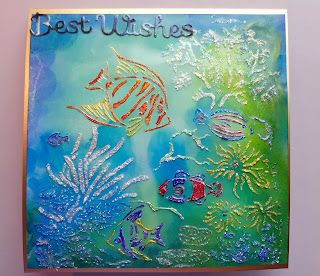 alcohol inks, glossy cardstock, Undersea stencil, pearl and glitter goop, spreading knife, paints, sizzex machine, saying
Animal Friends-Fish, Whale or Dolphin
I was having fun playing around with this stencil after I took different alcohol inks to create the background. I took my spreading knife and, like icing a cake, I spread the pearl goop in some areas and the glitter goop in another and set it to dry. Once dry, I had fun colouring everything and finally added the saying at top for a card that can be used any old time. 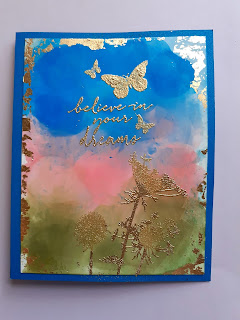 alcohol inks again, alcohol to spread the inks around. saying stamp and flower stamp, gold and Egyptian gold stamping embossing powder, gold embossing dye ink pad, versamark ink, gold leaf!
Crafty Creations-Anything Goes
So I am on a kick using the alcohol inks and tried to achieve a garden and sky look. I watched a youtube video and took my versamark pad and stamped the edges and took gold leaf that I have never used and placed it down to create the rough edging all around. I stamped the flowers and saying in gold and embossed in 2 different gold powders, placed it on blue shimmer paper and voila! 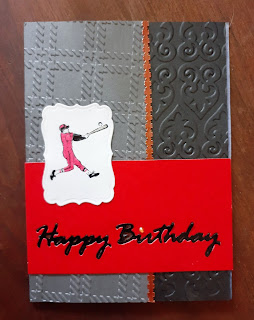 dark and light grey shimmer paper, cuddlebug, sticker border, orange pen, orangy cardstock with the Happy Birthday already cut out using the sizzex (see the orange Happy Birthday a couple of cards above), black saying die cut out, ball player stamp, markers, border die-cut.
The Male Room-Sports
This was a card for my brother who loves Baseball...all sports(almost) but he loves baseball and I had this ballplayer for years and every once in a while he comes out to play. I am so...not sports-art, film , yes-sports-no. I did hit a baseball once, in grade school and shocked all my classmates:) Anyway, my brother's favourite team are the Baltimore Orioles so I decided to colour the player all in orange since they had this type of uniform once. I looked up their uniforms and noticed they used black and grey too so this is why the colours are used this way. I took the papers and put them through the cuddlebug using different embossing folders, pieced it all together and there was his card.
Posted by Birgit at 7/29/2020