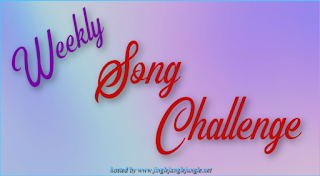 Another week for Jingle, Jangle, Jungle to bring some fun music themes to us and this week is no different. I always try to choose songs that pop into my head right away. I don’t seem to be of this time..oh well. Maybe I will surprise you one day and choose classic rock which I do love. Here are her 3 themes:

A SONG WITH A BODY PART IN THE TITLE

A SONG WITH A TOY IN THE TITLE

A SONG WITH A TIME OF DAY IN THE TITLE

This song is from their final album(The Visitors) which I own and love. It’s a song about mom and her daughter and it is so touching. I think of my mom now.....

French-Canadian Franks Mills got an international hit with this song and was played so much that many people got sick of it. I always loved it from the time it came out when I was 15. I always love music boxes and find them enchanting. This song just made me feel happy during rough times because of being so bullied. I love this song.

This is another song I just love so much and first heard it in the Astaire/Rogers film, The Gay Divorcee.  It is a Cole Porter song created for the 1932 Broadway musical, The Gay Divorce. The title had to be changed for the film because of the Hays Code. ...no divorce can be happy...There are so many renditions of this song and wanted to choose Thomas Hampson who is a great opera singer but also known as the Ambassador of the American Song because he makes it a point to research the songs etc.. that he will sing. Alas I could not find it when I searched through here but I did listen to Shirley Bassey("Goldfinger" theme song fame). I think of a man singing this but she does a great rendition. I made it a point not to show Astaire and Rogers even though I love it and I hate, I repeat, hate Diana  Krall's singing. I just can't stand anything she has sung and feel she is grossly over-rated. Yes...my humble opinion.

Can you think up 3 songs that fit the themes?