I'm Baaaaaack:) I have been away except for reading other blogs mainly due to extreme pain. It sucks when I can't hold a pen but I am back to normal now...whatever that is and frankly I don't want to be normal, maybe Abby Normal:)

So I have been following, on the sidelines, this great film blog where you follow a certain theme each Thursday and people post their 3 favourite (or not so favourite) films they have seen. This was invented by Wandering Through the Shelves which I found via Drew at a Fistful of Films another great blog all about films. So this week it is "All In The Family Edition: Twins.  There are some films I still need to see like "Dark Mirror" with Olivia De Havilland so that is not on my list. Here is mine... 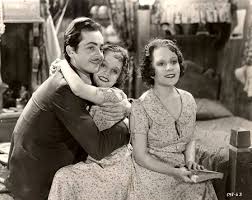 I love this movie! It would never be made today with all the politically correct crap out there but back in the day, when Freak Shows were alive and well, people made a living being gawked at. It is horrible but many of these great people would not have survived if not for these shows. Todd Browning, of Dracula fame, was the director and took a genuine interest  into the people's lives and created one macabre film. In this film, the "beautiful" people are the true freaks-mean and ugly whereas the "ugly" people are family oriented, caring and loyal. The main plot concerns a midget played by Harry Earles who is engaged to another little person played by his actual sister, Daisy Earles but he has the hots for the tight-rope walker played by Olga Baclanova who is up to no good. There are sub-plots where you get to know the various people who work in this show and one are the conjoined twins played by Daisy and Violet Hilton. They are one of my favourite. One is in love with this one man whereas the sister can't stand him. It is played quite well by these 2 ladies whom you know, nowadays, would have been successfully separated. This film was banned for almost 50 years due to the content. 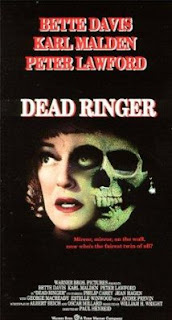 It is such an evil looking poster eh? Bette Davis in all her swaggering Davishood plays identical twins-one rich and nasty, the other poor and nice. The poor lass has a cop for a boyfriend played by Karl Malden which does not bode well for her plot. Peter Lawford drips in icky goo as the sleazy boyfriend of the rich one. You know that Bette Davis probably chewed up Lawford off the set. This film is actually directed by Paul Henreid of "Casablanca" fame (he played Ingrid Bergman's husband) and he co-starred with Davis in "Now Voyager" where cigarettes take on a whole new meaning. 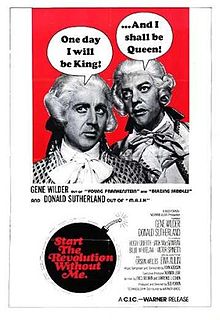 START THE REVOLUTION WITHOUT ME (1970)

This is a great comedy!! If you have not seen it-go and see it! It is narrated by Orson Welles ("later that night...still 1789) and stars Gene Wilder and Donald Sutherland as 2 sets of twins where they were switched up at birth (see the movie) resulting in one pair growing up poor and stupid and the other being the Corsican Brothers-rich and stupid but also deadly. Hugh Griffiths plays the buffoonish King Louis XVI ("I thought this was a costume party") and Billie Whitelaw plays the nymphomaniac Marie Antoinette.  Of course it takes place just before the French Revolution where the peasants get mistaken for the Corsican Brothers and vice versa. Everyone is trying to kill, well, everyone especially at the ball and these chaps have no idea what is going on. I am not sure I do either but it is so wickedly funny that it is a hidden treasure. Suzie Mac from "The View from the top of the Ladder"  knows this film and now I know of one other person aside from my ex who knows this film.

OK there ya have it! My 3 picks. Glad to be back and hopefully I will compile a list of films I have seen while I was regenerating.
Posted by Birgit at 7/30/2015