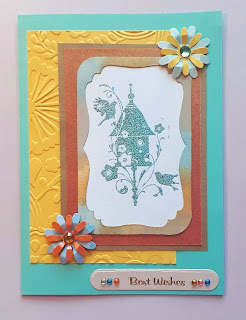 I have to come up with better titles, but I always sucked at that when I took creative writing. I had bits and pieces lying around so I took my stamp of these birdies, stamped them in silver and heat embossed them with a blue and silver embossing powder. I had this frame lying around for ages which I just sponged with various colours in distress ink. I took my yellow cardstock and ran it through the cuddlebug sandwiched between the embossing folder that has flowers all over it. I stuck them all in place with using various cardstock as you can see. I added the "Best Wishes" in gold sticker with some gems on each side. I have 2 different sized flower punches which I glued in place and placed 2 gems into the centre. Happy Spring!! 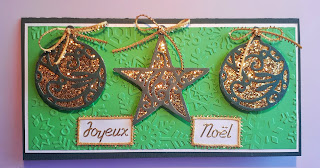 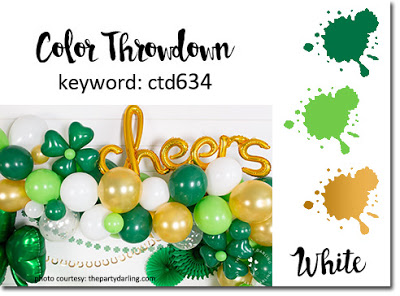 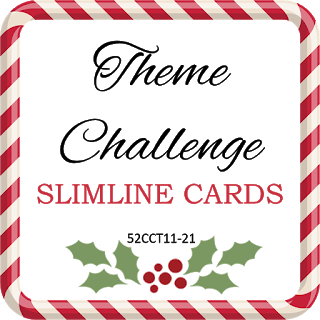 I have been on a green kick lately, maybe because of St. Patrick's Day but I had this image in my mind when I saw the colour combo over at Color Throwdown. I took my star and ornament die cuts and placed them on the sizzex machine on top of dark green paper, cutting side down, rolled it through the machine and...voila! I glued it down(not so voila) on gold sparkly paper and cut around the image. Now comes the cuddlebug machine where I rolled the lighter green paper through, sandwiched between the snowflake folder. I layered it between white pearl paper and dark green and adhered them all together. I decided to actual make bows, at which I suck at, and glued them on top of the ornaments..oh and the ornaments look 3D because I used pop up dots on them. I took my letter stickers to make the French Christmas saying and there she is. 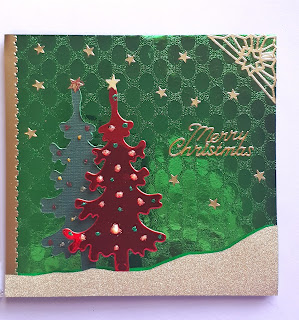 I had cut out a green, shiny tree over a year ago with this shiny paper and it was lounging around like a deadbeat in my craft room so I finally kicked its ass to be of some use. I glued a dark green backing to it and added a gold border sticker to the edge (to hide a mishap I did). I used the same tree diecut to cut it out of the red cardstock using my sizzex and adhered it on top using pop-up dots. I had some sparkly gold cardstock lying around so I cut it out to make it look like some glittering ground. I added the sticker saying, star border and star stickers to complete the look. Finally, I took out my stickles and added the tiny dots on the trees.

There ya have it!