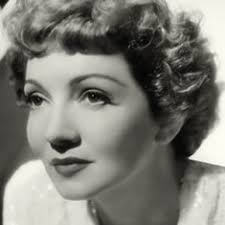 DIED FROM: Old age after a series of small strokes

MARRIAGES: 2 times-first to actor Norman Foster; 2nd to a doctor

KNOWN FOR: hating her right side of her face so much that she had it built, into any contracts, that they could only film her from her left side. She once had the whole set be redone so it forced the cameramen to film her on her left side plus she would, sometimes, paint her right side of her face green. This is why the crew called her the Fretting Frog.

OSCAR WIN: It Happened One Night-1934

Claudette was a huge, I mean, huge star and should be better remembered than she is today. When one hears her name now, it is always about her being a closeted lesbian because of a picture of her riding down a slide with Marlene Dietrich where they look like they are having fun and her personal friendships with Verna Hull, a wealthy heiress, and her last friendship with Helen O'Hagan. There are no pictures of her kissing these ladies just rumours seeming to come out only after she kicked the bucket. Sure, maybe a rag magazine may have suggested something but Oh My God! Does every chick in Hollywood have to be gay, Bi or whatever? Her and Verna had a close friendship where they went halfs on a NYC Condo and, when Claudette and her husband bought a home in Barbados, Verna bought one next to her. The friendship ended horribly when Verna said something disparaging about Claudette's dying husband and it came to verbal blows. Soon after her spouse died, her mother and brother died and, even though she had a difficult relationship with her mother (unsure about her brother), she became really good friends with Helen. Helen was born in 1930 and other friends said Claudette thought of her as the daughter she never had. When Claudette died, she left the bulk of her estate to Helen with a statement saying to treat her as if she were my spouse. From that, it is suggested they had  more than just a loving friendship. Well then, I must be a lesby because I consider my best friend and I soul mates and would love to live with her if I should outlive my beloved hubby.

OK, got that out of the way and, Joel, if you read this and wish to let me know if I am in the wrong, please do. Her first husband and her never did live together, which is strange but her mom, a controller, hated his guts and she lived with Claudette so.... 7 years later, they divorced.

Claudette, aside from her vain insecurity, was a very genial person, mostly. She did not get along at all with Frank Capra who said she would throw fits on the set. This might be because she, and Gable, were both loaned out to Poverty Row Studio, Columbia, to make this awful picture called "It Happened One Night" as punishment. Claudette also disliked working with Paulette Goddard who became friends with Veronca Lake and overheard Goddard say she got along better with Lake because they were closer in age. (Goddard was closer in age to Colbert but hey...I think it's the vain thing going on here). Otherwise, Claudette was known to be a good egg and could do comedy and drama equally well and wanted to do her very best.

She actually never wanted to become a film star loving Broadway theatre much more but, the money was good and she became famous very early on despite a horrible first movie (a silent). When film parts started to go, she did quite a bit of TV during the 50s and 60s plus she returned to theatre. After decades off of the TV/Film she returned to "The Two Mrs. Grenvilles" in 1987 winning a Golden Globe and was up for an Emmy. She may have had a second movie career starring as Margo Channing (instead of Bette Davis ) in "The Lady Eve" but she was in traction severely hurting her back doing a stunt in another film ("Three Came Home"...my favourite). To be honest, I can't see anyone else but Bette in the role.

1. The Sign of the Cross (famous for bathing in asses' milk which curdled and stank after a couple of days)-1932