November 11th Has Passed By But...Lest We Forget 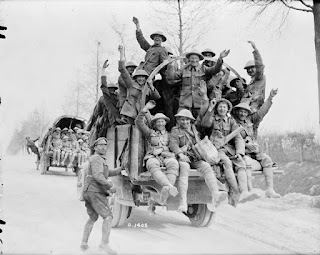 I'm not meaning to be a Debbie Downer (sorry to all the wonderful Debbies out there and...where did that quote come from??) but I have to mention some great songs about the 2 world wars. I actually had a great weekend...not working until Wednesday and off Friday for my work's Christmas party which should be fun. My friend V.J. came to visit me Friday night and left today, Tuesday so I have lost so much and need to catch up. Anyways, I gave a little thought to my mom and dad who both experienced the war but my mom as a German kid and teen and my dad as a Canadian soldier. I thought of my 2 uncles, my mom's brothers whom I never met-one was 19 and the other a little over 1 yr old. Uncle Kurt died on June 30, 1945, along with 178 other German soldiers, all of their "wounds" as told to the families by the Russians. The only soldiers left in the hospital were Russians and my Uncle's body was bull-dozed into a pit. The Nazis did horrific things as well as some Germans....but not all. We better never forget all the atrocities or they will be repeated..just look at what is happening now in the Ukraine. Beware....do not hate All Russians as they should not be white-washed like the German people have been. Anyways, here are my 3 choices for this week.

1. CHRISTMAS IN THE TRENCHES SUNG BY JOHN MCDERMOTT-1993

This is a very moving song originally written and performed by John McCutcheon (you can listen to his version here...I hope) in 1984. He wrote based on the very famous truce between the Brits and Germans on Christmas Eve in 1914. The Allies could hear the German soldiers sing Silent Night and they started to sing too. The German soldiers gestured to meet in No Man's land and they did! They shared Christmas songs and gave each other gifts of food or whatever they had handy and even played Football, called Soccer for us folks. McCutcheon met some of the German men who came to his concert and heard this song. John McDermott, A great Canadian/Scottish tenor often comes to my little city and my ex and I brought my mom and my in-laws to hear him sing. He speaks very highly of all soldiers from all wars and sings many songs that people from war can relate to. My mom and my in-laws met John and i have a picture of my mom with John McDermott. I have to find it.

The great Vera Lynn died, in 2020, at the age of 103 with her wits still with her. She just did a collaboration with Katherine Jenkins (you can here it here..again, I hope) on this song giving the torch to Ms. Jenkins who must have been just tickled pink. This song was written by Walter Kent in 1941 when the British were fighting the war and won the air overhead made famous as The Battle of Britain (1940). This win, that the British soldiers thought they would never win, helped change the course of the war (one of many, thankfully).

I heard about Chris DeBurgh when I was a teen and bought his very famous record. "Spanish Train" and this song was on this record and it made me cry. I started to read up about Passchendaele and found that this battle put Canada on the map as a great nation. When, in 1917, the British, Australians and New Zealanders could not take the ridge, we were sent in and, despite heavy rain, mud and less troops with heavy casualties (almost 16,000 Canadians died), The Canadians took the ridge but...for what? This Irish folk singer really knew how to write about this battle.

Can you think of any songs that make you think..."Lest We Forget?"