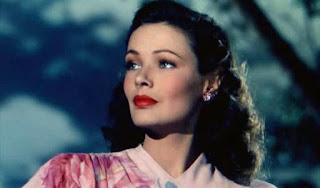 AFFAIRS: Tyrone Power, Howard Hughes, Kirk Douglas (His manly part should have fallen off from all the work out he gave it), JFK (Ditto), Prince Aly Khan

OSCAR NOMINATIONS: Leave Her To Heaven (should have won)

KNOWN FOR: The best overbite that most men would love to kiss; high cheek bones, brilliant green eyes; her sheer beauty.

This is one of the great beauties and one of the most tragic ladies that graced the silver screen. A definite beauty that could easily have played Scarlet O'Hara if she was famous back in 1939, but she was not yet, "discovered". She went to school in Switzerland and learned to speak fluent French before coming back to the States. She married the famous costume/fashion designer, Oleg Cassini and was longing to have children. She was overjoyed to become pregnant in 1943 and was healthy until she contracted Rubella shortly after volunteering at the Hollywood Canteen (Started by Bette Davis where the US Servicemen were served food and could dance with famous movie stars). The German measles didn't harm Gene but it was devastating to her unborn daughter, Daria, born severely mentally disabled. Years later, Gene met one of her fans who told her that she was in the service but was sick with the German measles. When she was told that Gene Tierney would be at the Hollywood Canteen, she left her quarantine and snuck out to meet her favourite star. Can you imagine meeting the person who gave you the measles that destroyed your child? Thankfully, Howard Hughes always made sure that Daria was given the best treatment in the best care places for children.

Gene had a few love affairs with JFK being one of them. Thinking he would marry her, she found out cruelly when he told her he could sleep with her but she was not marriage material if he wanted to run for office and, shortly after, married Jackie..nice guy... great president but an a-hole to women. Anyhoo, She also had an affair with prince Aly Khan but his family decided she was not marriage material and the affair ended. Rita Hayworth thought she dodged a bullet since Rita was married to the man.

Unfortunately, Gene suffered from severe bi-polar disorder and depression resulting in many numerous shock treatments which she wrote about in her autobiography and became an advocate against this type of treatment. She once, Christmas Day 1957, had to be coaxed off of a ledge, 14 stories up, by the police which was a tense 20 minutes. Thankfully, she found some peace with her 2nd husband (who was married to Hedy Lamarr previously) and could enjoy her life out of the limelight.

She started up smoking thinking she sounded "an angry Minnie Mouse" when she first heard her voice on the big screen. The smoking lowered her voice but gave her the emphysema that led to her death. She was luminous and a much better actress than given credit for at the time. She was one of a kind.