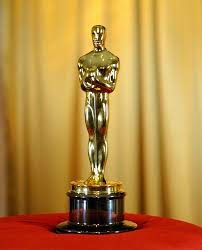 Oh yes! It is that time again when many, many people, but few I know, watch the Oscars. This Sunday will be the telecast for us to watch all the beautiful people( aka the pushed up ta-ta's, face stretched, botoxed lipped, watermelon butts, I just eat healthy non humans), in their gowns and tuxes walk down the red carpet all vying for a gold statue. If Moses appears to them, they better start to sweat!.

Is it just me or are you also sick of seeing huge asses that can cast a shadow over Cleveland and dresses cut down the middle where their cantaloupe boobies are all to see. One dare not say classless because it is all the rage right now. I love the elegance of Grace Kelly and Audrey Hepburn but I also miss the  WTF outfits of Cher and Bjork.

I miss my dad for many reasons but watching the Oscars is one of them. He loved all these awards shows and  we would watch the Oscars together. For that reason my first memory of the Oscars is the streaker. Yup, a streaker ran across the stage while David Niven was speaking.  My next memory was Sacheen Littlefeather denying the Oscar for Marlon Brando. He hired her to say "No" to Oscar because of the plight of the Indians because he was too much of an ass to go up there himself.  He did take the Oscar later on after all and Sacheen was found out to be an actress.  Now the juicy part of Vanessa Redgrave winning and then commenting on Zionist Hoodlums in her acceptance speech brought on the censoring of what people say. I remember my dad saying a few choice words and then Bob Hope and Frank Sinatra saying something after. Vanessa was not allowed to come back for years. Susan Sarandon and Tin Robbins were also not really invited for a few years due to their political outspoken views. People often loved to say something political at these awards...I miss that because  they often sounded so, so...stupid.

Who remembers Rob Lowe singing with Snow White to CCR's "Proud Mary"? This catastrophe was happening while laser beams were being directed at them in some make shift "I am saving Snow White" theme. I was truly hoping it was Logan's Run and they would have been vaporized because it was that bad. I recall the laughable Debbie Allen choreographed  numbers to the best costumes. Seeing Henry the 5th costumed dancers was quite hilarious-laser beams should have been there as well and blotto all of these dancers right out along with Debbie Allen.

The we have the speeches to contend with. Now most are boring and they thank the usual people but what always kills me is when they thank God. I mean, really? Do they not get the irony? They are thanking God for letting them win a Golden statue, like God is so happy that they won this over stopping children from starving, animals being abused or war starting some where. Who wanted to slap Tom Hanks when he won for Philadelphia? Who wanted to slap Gwyneth Paltrow for winning or just because she talks? Who is with me?

With all this, I love it! I love the outfits, scream at the T.V. when someone is wearing a blah dress and no necklace. What the hell is wrong with wearing a necklace? Screw the bracelets! Ok yes I am sad but I do like this type of crap.  So I have my own little list for people who watch the Oscars. I have not seen many of these films so I am with most of you especially with the short films, documentaries, animated shorts and the sound mixing and sound editing (what is the difference??).  So,  Here are my questions for The Oscars!

1. Who is best dressed?
2. Who is worst dressed?
3. Which film would you be really happy if they won in their category?
4. Which film would make you kick your TV in if they win? (mine is Boyhood)
5. Which acceptance speech was the best?
6. Which acceptance speech was the most boring? (take a pick-more than one I am sure)
7. Which drug are they on? You know, some go up and you wonder WTF they are doing?
8. Which actor/actress would you love to see get a pie in the face? or see trip?
9. Who wishes for a gaudy 1970's musical number? I hope they have one at least

OK there you have it:) Some of you don't watch this, I know but for those who do..I hope to read your answers:) Now repeat after me..."You like Me...You really, really like me!" Oh I do predict Snorehood winning Best Picture & director (I pray not), Michael Keaton winning Best Actor and Patricia Arquette winning Best  Supporting Actress. Julianne Moore will win best Actress and J.K. Simmons for Whiplash in Best Supporting Actor.  So now we wait for the show:)
Posted by Birgit at 2/19/2015