Daddy's Birthday is Coming Up 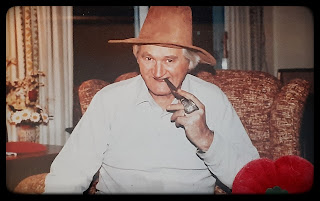 My dad would be 109 come March 14th so, in honour of my dad, I am showcasing the big hits from 1913! Let's get the party rockin'...hahahaa. The flower part on the lower left is a poppy because he was a WW2 veteran who fought along the Rhine, was part of the liberation of Holland and was badly wounded in the Reischwald Forest. He is wearing my brother's hat because my brother liked to think he was a hippie back in the 1980s. Let's rock 1913 style...

I hope this plays. I first heard this song when I watched Easter Parade with Fred Astaire and Judy Garland and laughed at this dumb ass song. Every once in a while, I will call my hubby this just to see his reaction which usually looks like he is ready to call the white coats to bring me to a home. These gals seem like a good fit for the song.

2. YOU MADE ME LOVE YOU SUNG BY DORIS DAY

I have to admit, I do love this rendition by Doris from the film, "Love Me or Leave Me". It was written by James Monaco with lyrics by Joseph McCarthy (not the nutty senator who started the witch hunts in the late 40s and 50s). It has been performed by many people with Judy garland being one of the most famous.

3. TRAIL OF THE LONESOME PINE SUNG BY LAUREL & HARDY

My dad's favourite comedic team was Stan Laurel and Oliver Hardy so I thought this was fitting. It's from their film "Way Out West" (1937) and it is nice to listen to especially when Stan starts singing in a low voice before going all out soprano. The Voices were Chill Wills and Rosina Lawrence which just cracked me up. This song was written by Ballard MacDonald(Lyrics) & Harry Carroll (Music).

By the way...I got a job!!! I worked on my resume so it looked better and sent it out (I got a tip from a friend of mine about this job). I have not yet signed the paperwork but I have been told I will start work on April 4th with a bankruptcy office of Goldhar & Associates. They just called me on Monday and told me that I fit for a full time position and will be working out of their Niagara Falls office. The first week I have to travel to Mississauga for training so I am very happy. So I will buy the sparkling Spumonte Bambino and you provide the plastic glasses:)))