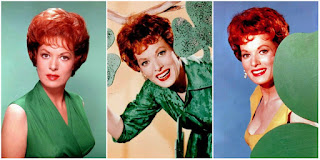 I love Maureen O'Hara who was not only beautiful, strong and vivacious but had a great voice. She loved her birth place, Ireland, and sang many songs that made her think of her beloved home. I thought I would share some with you...

1. IRISH MEDLEY WITH O'HARA, PERRY COMO AND THE MCGUIRE SISTERS

Isn't this great? Well, I think so with a nice group of traditional Irish songs. Too-Ra-Loo-Ra-Loo-Ral is one of my favourites as I heard it sung by Bing Crosby in the film, "Going My Way." It was composed in 1913 (Happy Birthday daddy-March 14, 1913) by James Royce Shannon for Tin Pan Alley musical, "Shameen Dhu." "Dear Old Donegal" was made popular by Bing Crosby, again, and was written by Steve Graham back in 1942. "When Irish Eyes Were Smiling" is a popular tune for sure sung by Der Bingle and many others. It was written in 1912 with lyrics by Chauncey Olcott and George Graff Jnr. and music by Ernest Ball. Finally, we have "Did Your Mother Come From Ireland" written in 1936 by Michael Carr & Jimmy Kennedy first performed by...guess? Yup Bing baby.

I had this song, sung by her, on previously but how can one not choose "Danny Boy. I had to showcase this song again with Maureen singing it because she was such a huge Irish patriot (and loved her second country -U.S.A.). This was written by Frederic Weatherly and it was set to the music of Londonderry Air.

This is such a pretty song and is a traditional Irish folk tune but I could not find out who wrote it nor when. Maureen came out with a few records and this stems from her 1961 album of Irish standards.
Which Irish tunes do you like? Any Celtic songs or performers you love? Let me know.
Posted by Birgit at 3/16/2022