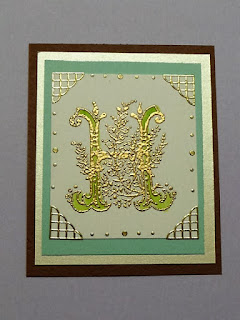 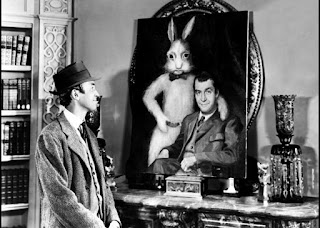 DIRECTOR: Henry Koster
STARS: James Stewart, Josephine Hull*, Peggy Dow, Cecil Kellaway, Charles Drake, Jesse White, Harvey, the Pooka
PLOT: A nice, happily picked man has an invisible 6'3 1/2" rabbit as his constant companion much to the chagrin of his sister and niece. They decide to have him committed but not all goes as planned.
QUOTE: Well, I've wrestled with reality for  35 years, Doctor, and I'm happy to state I finally won out over it.
OSCAR NOMS: Best Actor
OSCAR WINS:Best Supporting Actress*
LOVE: The overall sweetness of the film which comes through from Stewart, Hull and Kellaway
FAVOURITE SCENE: When Jimmy's character talks to the head of the institution about Harvey.
FAVOURITE CHARACTER: Elwood P Dowd (James Stewart) and Harvey (The Pooka)
TIDBITS: James Stewart loved playing this role that he repeated it on Broadway and on a TV Special. He considered it his favourite next to George Bailey in It's A Wonderful Life.
SIX DEGREES (MORE OR LESS) OF SEPARATION: James Stewart to Jacl lemmon (Bell, Book and Candle) to Walter Matthau (The Odd Couple) to Goldie Hawn (Cactus Flower) to Ed Harris (Swing Shift) to Viggo Mortensen (Appaloosa) who starred in 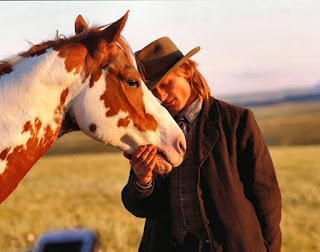 DIRECTOR: Joe Johnston
STARS: Viggo Mortensen, Omar Sharif, Zuleikha Robinson, Louise Lombard, J.K. Simmons
PLOT: A drunken man, haunted by his past, is offered to ride his horse in a 3,000 mile race in Arabia-The Najd desert area. He takes them up on his offer.
QUOTE: Mister.....you can say anything you want about me, I'm gonna have to ask you not to talk about my horse that way.
OSCAR NOMS: Nil
OSCAR WINS: Nil
LOVE: That it is a true story. The resilience that shows throughout this film.
FAVOURITE SCENE: The Indian Ghost Dance
FAVOURITE CHARACTER: Hidalgo the horse!
TIDBITS: Descendents of Hidalgo are still roaming the U.S. At the end of this film, Viggo (Hubba Hubba) bout the horse that played Hidalgo.
SIX DEGREES (MORE OR LESS) OF SEPARATION: Omar Sharif to Peter O'Toole (Lawrence of Arabia) to Katharine Hepburn (Lion in Winter) to....gotta wait until Monday:)