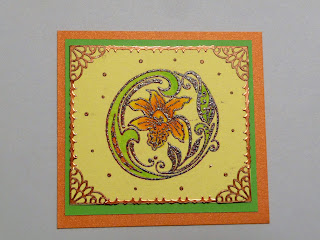 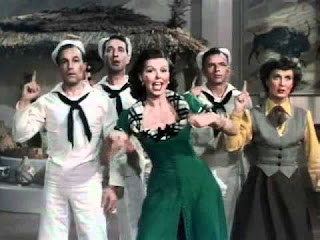 DIRECTOR: Stanley Donan & Gene Kelly
STARS: Gene Kelly, Frank Sinatra, Jules Munshin, Vera-Ellen, Ann Miller, Betty Garrett
PLOT: 3 Sailors, on a 24 hour leave in New York City, go on the hunt to find Ms. Turnstiles. Along the way, they meet a couple of other wacky gals.
QUOTE: (after a call comes in that a dinosaur has collapsed, the cop says)- That's terrible, she's my favourite singing star, that Dinah Shore!
OSCAR NOMS: see below
OSCAR WINS: Best Musical Score
LOVE: The Dancing! What else is new
FAVOURITE SCENE: The Prehistoric Man scene.
FAVOURITE CHARACTER: Claire Huddesen(Ann Miller)
TIDBITS: Frank Sinatra was at his height of fame with all the bobby soxers. The production decided to film the opening scene on location which was a first for musicals. Not only did they have to deal with the constant rain but all the fans wanting to see Frank. At the end of the song which takes place at Rockefeller Centre, you can see all the fans at the top watching the filming. Oh, Sinatra was really , really skinny and had no ass so he had to wear a prosthetic to show a little something on the screen much to his chagrin:)
SIX DEGREES (MORE OR LESS) OF SEPARATION: Gene Kelly starred with Spencer Tracy(Inherit The Wind) who starred with Marlene Dietrich (Judgement at Nuremberg). She starred with John Wayne (The Spoilers) who starred with Robert Duvall (True Grit). Robert Duvall starred with Kevin Costner in... 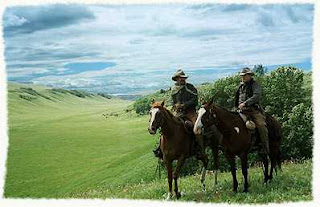 DIRECTOR: Kevin Costner
STARS: Kevin Costner, Robert Duvall, Annette Benning, Michael Jeter(his last role), Michael Gambon
PLOT: Open Rangers, who wish to live in peace, come to a small town ruled by a nasty land Baron who hates open rangers. When one of the rangers is attacked, they seek help from the Doctor but only his sister is there who helps out. Now the rangers must defend what they have.
QUOTE: It's a pretty day for making things right!
OSCAR NOMS: Nil
OSCAR WINS: Nil
LOVE: The Cinematography
FAVOURITE SCENE: When Duvall's character reveals his first name to Costner's character
FAVOURITE CHARACTER: Boss Spearman (Robert Duvall)
TIDBITS: Anthony Hopkins loved this film so much that he atually wrote fan letter to Robert Duvall and Kevin Costner.
SIX DEGREES (MORE OR LESS) OF SEPARATION:  Annette Benning starred ( and married) Warren Beatty (Bugsy), who starred with Vivien Leigh (Roman Spring of Mrs. Stone) who starred with Clark Gable (Gone With The Wind). Clark Gable starred with Spencer Tracy (Boom Town) and he starred with.....