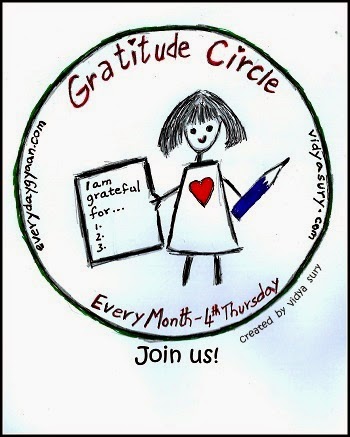 January-that first month after the magic of Christmas when reality hits, people get their post Christmas bills that make them weep, we see commercials for Cuba, Mexico and cruises for people who can afford it and it snows and the sun is not all that bright. To put a better spotlight on the month, sickness abounds and I am one of the millions fighting a stupid cold. I feel like I swallowed a woolly mitten, my voice has dropped 5 octaves and I feel like I will cough up a lung.

Oh yes...this is about gratitude:) and I belong to the Gratitude Circle Now even though sloths all over the world are giving me the thumbs up for my achievement in the organization of my crap...which has not really happened yet, I have been grateful for movies. Yes the movies!

No, my sloth-like skills have not moved me to an actual theatre but my ever expanding ass has found the couch and my hubby and I rented movies. Yup we still rent films. We don't have Netflix or Satellite nor do we even begin to know how to attach cables or laser-beams from our computer to the TV (which was bought in 1997 and is still going strong). I am grateful for film. I love film from the time I was a little kid and my Dad introduced me to the wonders of the screen. One can forget ones' troubles, sickness and dive into the greatness that is film.  so which films have I seen so far....

1. THE EXPENDABLES 3-The blow'em up feel good manly men's film where there is always one chick in the flick just to make sure the men don't get told they are pigs. Now men should know that we women will still call men pigs because we can:) I enjoyed this film, actually all of them. They blow things up, they kill a few hundred men, destroy towns, buildings well whatever is in their way but it is fun. I almost want to say wholesome except for all the killing, bad language and bad acting but hey-they are fun! I enjoy a good action film and this has action. I may not understand what Sylvester Stallone is saying but it has balls (the film not Stallone).

2. BOYHOOD- This film is on many critics top 10 lists for last year's films. It has won many awards and is up for many Oscars. The big reason it has received so much attention is the Director filmed this over a 12 year period using the same actors and one sees the 2 children grow into young adults.  He filmed around the other actor's availability and it is so neat to see these people age over 12 years.....NOT! I am sorry what a colossal bore!! It has children who wish their parents could get back together, it has the mother marry 2 deadbeat jerks, one who is an abusive alcoholic, it has the children going through their own stages of growth but it is boring! This director was so bent on the nuance of  filming over 12 years he forgot a key component-a great story that holds you and makes you care about the people. I actually wanted to bitch slap the kid when he was a teen. He looks like Hayden Christiansen's brother. Let me ask you, don't you want to bitch slap Hayden Christiansen (young Darth Vader)? Almost 3 hours long-dull as dirt.

3. THE 100 FOOT JOURNEY- This is not the best film in this genre but it is enchanting. It is about an Indian family who leave their homeland after the wife/mother is killed. They stop in a small town in France and the father decides to open up his own Indian restaurant right across from a very fancy pants French restaurant-you know the kind that serves 2 small bites of food and charges you $80 for it. The son of the Indian man has the gift of creating beautiful food. This film is about family, racism, love, acceptance and enjoying life. It is a nice film that puts a smile on your face.

4. GONE GIRL- I  can say, hands down, Rosamund Pike deserves the Oscar nom. She plays one batshit crazy nutbar which you would never ever want to meet. Oops sorry a bit of a spoiler alert there. This is one tense film and it's amazing how often Ben Affleck can play someone dumbfoundedly stupid but he can pull it off (hmmm maybe he is playing to his type..just kidding...maybe). It was a little long and I didn't care for the ending because it does make one feel they may do a second film, but it is worth watching.

5. CHEF- Yup, another one about food. this time a man frustrated with his job and his idiot boss who decides to finally listen to his ex-wife and have his own food truck. It is written and directed by Jon Favreau plus he plays the lead. His ex-wife is the luscious Sophia Vergara who I even want to see naked and I am straight as can be. I found the film a little long and I found the actor a little long-winded especially when he starts to talk about his profound thoughts on food to his son. If I was the son and he started to preach to me like that, my thoughts would be going to the nearest chocolate I want to buy. This film is nice but I was expecting more.

6. GUARDIANS OF THE GALAXY- Talk about one nutty movie! I loved it! It is fun!! The special effects are great-It would have been cool to see it in the theatre. The characters are well developed and Vin Diesel never acted so well (I am Groot). You have the green chick who came from some Star Trek set, The cool dude who still loves his tapes, this man who looks like some big rock and Rocky Raccoon...ok it is not Rocky but he is one ass kicking raccoon. Actually I just would have loved to pick him up and cuddle him but he probably would slapped me silly and knock me out cold. The humour is great and it is well written. You know there will be a second and I can't wait.

7. JOHNNY GUITAR- Never saw this coming eh? This is an oldie that I never saw before, starring the nutbar hanger in hand mom Joan Crawford. One just has to see this film  and then wonder if you didn't take some mind altering drugs. This is a film where the men are definitely second...it's all about 2 women even if Johnny Guitar is played by a man. No one cares about Johnny Guitar, he is just the  boytoy of Joan Crawford. She owns a saloon which will bring in oodles of money once the train tracks are built. The nearby town doesn't want the train because it will bring in the nasty settlers who will put fences up and screw up all the cattle men. Mercedes McCambridge plays the woman who is out to get Joan Crawford and they actually end up having a showdown. Apparently Mercedes gave quite the speech and the crew all clapped and gave her an ovation much to Ms. Crawford's dismay. After that, Mercedes noticed her part being cut back and she could not find work for a few years. She believed it was due to Ms. Crawford and her jealous ways which is not far off. I say watch this film-it is quite amazing and has much to offer.

Have you seen any of these films? Do you agree or disagree? Just a wondering. So there! I am grateful for the films I love to watch.