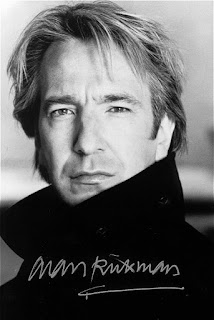 I have been wanting to write this for a while and since I have been to crippled to make a card or 3 this past weekend (which has bummed me out) I have decided to commemorate one of my favourite actors-Alan Rickman. Most people recall first seeing him from Die Hard but I remember him from Sense and Sensibility. When most gals were going hubba hubba for the pasty Hugh Grant or Greg Wise but I was all over Alan Rickman. I loved his voice and his intelligence just shone through everything he did. I almost went up and licked the screen but thought better of it considering I might get the plague and/ or be dragged off by the cops. I have decided to list my top 10 favourite films of his and they are placed in the order that I feel I like...for right now but this could change at any time. One movie that he was in but I can't stand that crappy piece of doggie do-do is Robin Hood with Kevin Costner. The only redeeming thing in that film was Rickman. Anyway, here is my top 10...

This is an under-rated western which I saw in the theatre and thought it was quite good. It stars Tom Selleck, of Magnum PI fame, as a cowboy who knows how to shoot and is hired by a man from Australia to help him rid of some pests.  He ventures to the Outback only to find out the man who hired him, played by Rickman, wants him to shoot the Aborigine's. This, obviously, does not sit well with the Selleck character and so the film goes on from there. Rickman was at his evil best.

This was actually on HBO and I saw this years later on TV and was spellbound by his performance. He captured the Mad Monk perfectly and showcased how much Rasputin orchestrated himself into the Russian Royal family. It was an acting tour de force.

I stumbled across this fun comedy with some serious overtones centering on the nutty antics of hair stylists. He plays a hairstylist who ends up in this contest who can create the most original hair style-totally off the wall and it co-stars Bill Nighy whom I also love.

Oh...this is not for everyone but I love this film! It stars Matt Damon and Ben Affleck as 2 angels who were thrown out of heaven and sent to Wisconsin to live out eternity. A small loophole made by a daffy bishop played by the late great George Carlin, may bring these 2 angels back to heaven but that would mean the end of the human race. One woman can save humanity and Alan Rickman plays a metatron who helps her out, so does a black angel, a muse and Ray and Silent Bob.

I think most of us have seen this film at some point in our lives or at least Bruce Willis jumping off the tower shirtless. Bruce plays an off duty cop who realizes his estranged wife and a group of her fellow co-workers are being held hostage by a devlish man played by..yup Alan Rickman. Alan Rickman was so great being menacing.

This is a story about love in all forms whether it be love found, love being new, lust, love lost, you name it and all the characters are interwoven. It is a great piece of filming and Alan Rickman plays one of the many people who has love in his life. He is "happily" married but screws it up. Emma Thompson plays his wife and the scene when she gets her Christmas gift is powerful with her stellar acting.

Oh-I think this is a hoot! and it is a priceless take on the Star Trek series and fans. Tim Allen and his co-horts are all actors from a famous TV show that took place 30 years before. They now are showing up at these fan expos and most of the actors are disillusioned. When they are taken to an actual ship by aliens who believe they truly are  what they portray on TV, hilarity ensues. Alan Rickman plays the actor who was an alien on the TV show. Throughout the entire film he wears his head piece...even when he is at home. If you need to have a luagh-watch this movie.

I am just picking the whole series because I can't choose one over the other and Snape plays a big part throughout the film. Alan Rickman left you guessing whether he was evil or good but you still liked him. This is strange since he was very menacing throughout and you know he never cared for Harry Potter but yet he did. Difficult job to do and he did it well.

I fell into lust with this man when I saw this movie. To me, he was the one I would pick if I lived during that time. This is quite a good film and his portrayal of the love struck older gentleman wishing for his love, played by Kate Winslet, to love him back. You really felt deeply for his character.

This is an off-beat comedy-drama with true heart and soul and I just loved it. A woman loses the love of her life, played by Alan Rickman. She goes about her day wishing he was back with her as she mourns the loss of her great love. One day, he is back and is sitting on the couch. She is overjoyed by having him return. she knows, and so does he, that he is dead but they are together. Unfortunately, he is always cold so the heat is often on a bit too high. Soon he asks her if some of his friends can come by and she soon has more dead people to contend with. Is this holding her back? Should her love still be with her? It is a different take on love and it is my favourite.