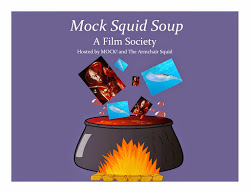 I didn't play last month for obvious reasons.....I was going nuts doing the A to Z.
This month we choose one of the previous ...choices:) I'm feeling really dulled in the head right now as you can tell from my fascinating writing here. There is quite the library being built up  and if you wish to check out what the others have chosen, head on over to the Armchair Squid. I chose the film which was originally reviewed by Toi Thomas. 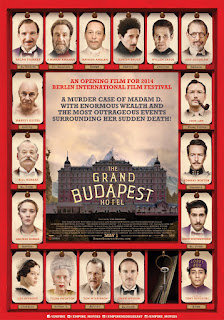 I love this film because it is so well written, acted and designed. It is quirky which doesn't appeal to many people but I am quirky so it fits:) It takes place when the hotel will soon close and an older man reminisces, to the Author, about its heyday back in the 1930's when he was first hired to work there. He works closely with the concierge, played brilliantly by Ralph Fiennes, who always puts great effort into whatever he is doing. Fiennes character, Gustave, makes sure the hotel is running smoothly and hemakes sure the older ladies are kept , um, happy (wink, wink). One, in particular, he is quite fond of and, unfortunately, she dies. It is believed she is murdered and Fienne's character is the #1 suspect. He escapes with the help of his bell hop( The Narrator) and the Bell Hop's beloved who bakes wonderful cakes. Everyone is after Gustave since he was in her will and was bequeathed a valuable painting so some (many) want him dead. It is a comedy by the way and it is an absurd one done with intelligence and great wit.

I love the cinematography since the director hearkened back to the early silent film days and used iris shots, fade outs and even a sped up scene on a toboggan. The art direction is rich and beautiful and the wit is priceless. One wonders why Ralph Fiennes doesn't do more comedy.  The director is Wes Anderson who directed The Royal Tenenbaums and Moonrise Kingdom. You either like him or you don't but many who did not like those two films still seem to like Budapest Hotel. I say give it a try and hopefully you will enjoy it.