This is the fourth cat that we adopted but she is next in line age wise, so this is why she is next. Mia....what can I say about our Mia except that she is a unique psycho..um, I mean cat. How did we find this special bundle of cellulite joy?  There was a business that catered to all things stamping and I would always be in there any chance I could since I love making cards. The owners, a married couple, belonged to a cat rescue society who would open their arms to many cats and people knew it. A friend of theirs lived in Niagara On The Lake and her next door neighbours were taking care of this cat that they no longer wanted since this cat was actually their son's. He no longer wanted the cat because he was getting married and the cat was in the way. I knew we already had 3 cats and that was enough but this cat was being chucked aside and was already an adult so the chance of this cat being adopted was doubtful.  Yes, I made the decision and said yes to the cat. We were told she was affectionate and got along great with other cats and dogs .....Da..da dum, dumb.

When the parents came to bring us the cat, the father couldn't wait to get rid of her. We opened the cat door and she went right under the bed... it took some time for her to come out from under her secure place but she did. Now to say she is slightly overweight is an understatement, she is one fat cat!( We inherited her this way). When we open a can for her, her eyes dilate in a sort of ecstasy kind of way and she sits by her dish waiting for food. One night, we heard a  Crack and Bang and saw her walk with the cat door around her waist. We soon realized that she hates all the other cats and the dog and routinely hisses at them if they are near her. She will hiss at us if we try to move her which is a feat in itself since she is quite the load. She will eat the other cats' food, guard her area and not let the other cats in and she is so fat that, to clean her ass, she drags her ass along our white carpet leaving a streak that one only sees on men's underwear. We have routinely shaved her butt and clean it and keep her away from the other cats' food. We try to exercise her but she just looks at us  and then flops down to be petted.

Even with her psycho ways, she loves to be near us and be petted and is a loving if not the fat...um, black sheep of the family.

NAME-Mia
AGE- 9 years
NICKNAMES-Mama Mia, Fatty Watty, Fat Swan, Psycho, the termite
LOVES-being with her human parents, licking our hands then biting them. Licking and purring even when getting shaved. Being petted, eating, eating, eating. Sleeping, sleeping, sleeping.
FOOD- Any food, anytime, anywhere. Caught her eating dog food once
TOYS- laser...when she can move, my foot. 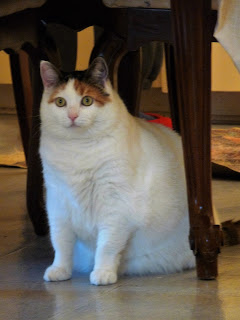 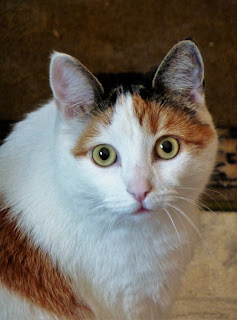 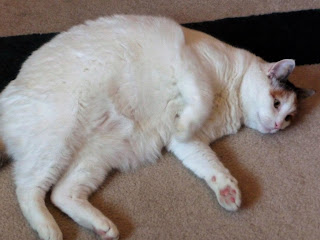