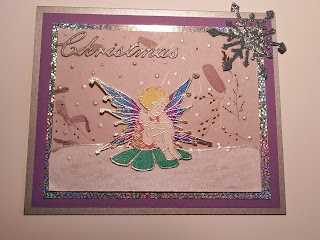 Here you thought I was talking about my friend's home in Vancouver:) ...close but not quite as he would never be caught dead in this outfit.

I decided to go the fairy route because I don't have an elf stamp at all (I must remedy that) and I have done Santa cards so I went this route and had fun creating this card. This is a new stamp that I bought when I was in Vancouver. I stamped the fairy and coloured her with glitter pens and fussy cut her out. I have this nice paper in a soft pink which I thought worked for the fairy on the lily pad. I layered the card in different papers and I used a snowflake die cut on...wallpaper. This wallpaper is from the 60s or 70s that was in a big binder my mom had. How my mom got this binder, I have no idea. 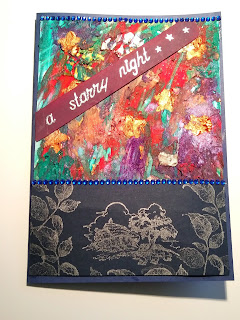 I saw something at a restaurant and thought up the idea of creating a sky. I took my pallette knife into the paste I coloured in green, purple, red and yellow and just gobbed it down onto cardstock. I took blue paper and stamped the cottage and leaves down then adhered it to the pasted part. I placed the letters down on a small strip and glued that down. Finally, I took some blue crystals that come in a line and glued that down. I added some stars using gold paint and a star stencil. I thought it looked like the northern lights and gave this to my hubby for no reason except that I love him. He spent some of his youth on Baffin Island and saw these lights many times and even slept in an igloo overnight after a day of fishing for arctic char(no, he is not Inuit).