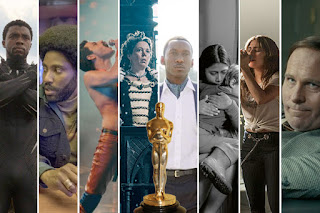 I can't believe that a another year has gone by but, thankfully, Meryl Streep is not nominated this year. So we have 2 Black Panthers-one from the comics and one kick ass real dude. An actor with horrible prosthetic teeth, a nutty Queen, a great pianist, a black and white drab social commentary movie, Lady GaGa with her real hair and a crazy ass Vice President.  It is the Oscars-full blown before they even have aired with all the controversy of the host to some idiots thinking it was wise to showcase some awards when commercials are on. WTF??? Thankfully, enough film people bellowed and the schmos over at Oscars put everything back in. I know many of you won't watch but I hope some of you will or at least catch a glimpse. I have made up my quick list of questions that you can choose when watching these people thank God for winning a Gold statue. Here are my 10 questions for you to ponder...

So There ya Go and just remember, the last time there were no hosts, this happened....talk about drugs!