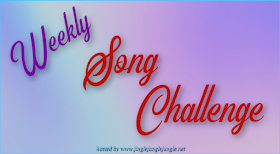 I believe this is week 8 hosted by Jingle, Jangle, Jungle where she gives 3 themes per week and one has to choose a song that is in the title, the artist or in the lyrics. The 3 themes are:

I fell in love with this song when I heard the beautiful Kathryn Grayson sing it in a compilation of MGM musicals called "That's Entertainment". She sang this in the musical "Lovely To Look At" (1952), a remake of Roberta, where this song originated from. I know the Platters made it more famous but I love this version. I have to admit I always loved the change in lyrics by Hawkeye Pierce (M.A.S.H.) while he showers..."Ask me how I knew, her brassiere was blue..."

Yeah, on the same film as above("That's Entertainment") I was introduced to the exquisite Lena Horne who sang this song in the musical, "Thousand's Cheer"(1943) and made me want to see more of her. Unfortunately, unless she played something typical like a maid, she wasn't greatly utilised.

My mom had this song and always recalled how my brother would start to dance to this song. This was a vivid and happy memory my mom loved speaking about. Somewhere, there is an old film reel showing my brother dancing when he was maybe 1 or 2 yrs old(my older brother was born in 1961.

Honestly, these were the first 3 that popped into my head.

Which songs come to your mind?