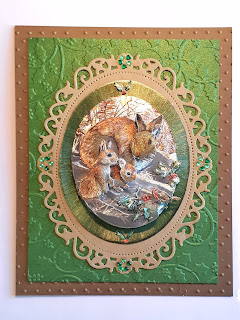 I grew up on a sawmill and have quite fond memories of my family home. You know that men from a lumberyard can be quite, shall I say, salty. One morning, my dad was wondering what the hell was wrong with the men not starting up the mill, so he went out right at 8am instead of 10 minutes later. Now, some time has passed and still no start of the mill, my mom decided to go out and I followed because I had to know. Apparently, a mommy rabbit made a nest and gave birth to 6 bunnies. The men didn't know what to do as they didn't want to disturb them. My mom, ever the pragmatist, said to just put them outside but it was still cool out so she created a nice nest in some soft sawdust away from the machinery and they started the mill. The bunnies were very cute and soon the little bunnies were scampering about and the men brought lettuce and carrots and making sure they would not get harmed. I thought that was the cutest thing..the rough men were all goo goo over the rabbits.

This was a quick card with 2 different embossing folders used on the green and brown cardstock run through the cuddlebug.  The Kraft colour was run through the sizzex machine with the die cut image frame to create that nice image that the bunnies are adhered to. I took pop up dots to make the 3D look. I finished the card with 2 different coloured green heart gems and placed them on the 4 spots you see.  surrounding the rabbit.

Any Bunny stories to tell...and no Playboy bunnies:)