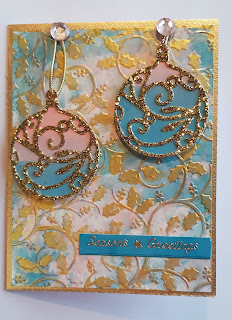 CHNC- something for a lady or girl

I missed the challenge for Christmas Card Throwdown for the colour choice, but I still completed the challenge and am happy with it. I used alcohol inks in pink and turquoise and spread it around for this background effect. Next, I took my  holly embossing folder and ran it through my cuddlebug for the holly image to appear. I used my gold paint and brushed on the gold so it would paint only the raised images(mostly). I glued it onto gold cardstock and set it aside. I took the alcohol inks again and created a 2 tone in the same colours. I have an ornament die cut which I used on gold glitter cardstock and ran that through my sizzex to cut out the ornament image. I glued the ornaments onto the 2 tone cardstock I just created and fussy cut them out. I used ribbon to make it appear as if they are hanging down and added 2 pink gems at the top. The final was cutting out the background for the saying, gluing it in place and adding the sentiment. 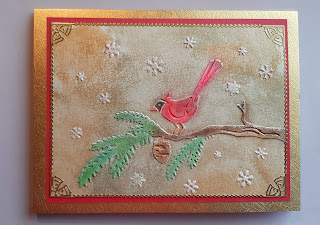 I am into my embossing folders recently so I took this one with the pretty cardinal and, before embossing it, I took 3 distress ink pads and placed them directly onto to folder. I put my white cardstock in and ran it through the cuddlebug. The raised images were still white but the background gave this neat background effect. I coloured the raised images with my pastel chalks. I added white gliiter on the snowflakes and the top of the branch and pinecone. I glued it onto red cardstock and gold finishing it off with some border stickers.

Wishing you all a fabulous day!