First of Advent was this past Sunday so.... 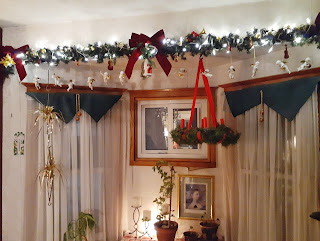 I have very good news...no cancer! I saw my Dr. last Friday and I got that great news plus she said I am healing well. I am still happy it is out because, apparently, I had numerous cysts (small) on my ovaries and uterus as well as numerous fibroid tumours (also small) plus my uterus was a little inflamed..reason? Who knows, but this is all history now and I have reason to celebrate. I did put, what you see in the picture, up on Sunday but did it in stages and I could feel the pain, although not like it was, so I stopped. I make sure to stop for quite a while before continuing and I am not doing as much as I would do normally in a day.

I thank my mom for bringing Christmas to me, my brother and especially my dad, who said that many times. Her German traditions, carried through from her mom and her mom before her, etc.. just fills me with Gemutlichkeit (say that 10 times fast). I can't think of a good English word that fits because it would encompass more than just cosy, warm, family, heartfelt...all those words plus. In fact, many of my friends love coming to my home because they feel so Christmassy and that makes me happy.

That being said, I am starting Christmas music, but slowly here and hope you enjoy it.

I first heard this just a few years ago on a rock station and immediately fell in love with it. I missed who did the song and heard it again making sure to mark it down. It is not so much a warm and fuzzy one because they were just upset by the commercialism that was taking hold during the holiday season (What about now!?). I just spoke to my friend V.J. who hates Christmas....I make sure to drag him into the Christmas store in Niagara On The Lake every time we go there. When I hear him talk, it is almost always about how commercial Christmas is and I can't argue with him how horrible it is. It used to be, here in Canada, that the Christmas ads and stuff would not show up until after Remembrance Day (Nov. 11th) but now Christmas competes with Halloween which is just disgusting. We even hear about this in the film "Miracle on 34th St" (the original and best version) and "Santa Claus is Coming To Town" (at the end of the show). Christmas is a state of mind and we have to avoid the malls and the negativity and enjoy what we can bring into our hearts. By the way, V.J. even loved my decorations and said I have done it very tastefully. He has bought a poinsettia too!

Yes, I do like some of Jethro Tull's songs and this is one of them. Once again, it is about what people forget..it's not about stuff or stuffing your faces but about helping people in need and remembering that it is not in what we get but in what we give. Gosh I sound so corny and just blecchy. Even I may want to throw up in my mouth a little...no, I don't want to do that as it brings back memories of my fun days from the 80s and 90s (a little less in the 90s).

3. IN THE QUIET OF CHRISTMAS MORNING BY THE MOODY BLUES-2003

I love the Moody Blues and yet, I had no idea they came out with a Christmas album but I was going through a separation that year so I will blame it on that. I want to thank Cathy over at her blog, Curious as a Cathy to have the album on her playlist. If you want to check it out, just head on over to her blog. I really love the way the Moody Blues took Bach's famous piece and made it their own in this Christmas song. Too bad that Ray Thomas had to leave the group due to illness but they still sound great.

When I first heard this I fell over from laughing so hard. I found out it was done by Denny Baumlee who had to call this Seymour Swine and the Squeelers because of laws but we all know it is good ole Porky. It really does sound like it is done at some party. I hope you get a kick out of it.