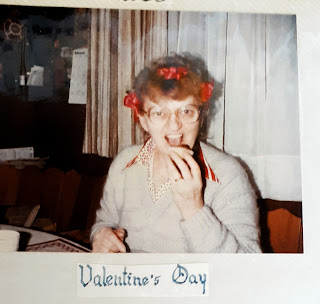 My mom's birthday is tomorrow, February 10th and she was born in 1928 so I thought I would cover 3 musical pieces that were big hits from that year. Sorry for the weird photo but I took this from a photo already in an album I created for her. This was taken in 1985 when she was 57 and I am now 57 and can't believe that I thought she was older then (not old as she was never old). My mom loved to clown and she often had her mouth open in pictures from eating to talking. How I miss her...

1. I WANNA BE LOVED BY YOU SUNG BY HELEN KANE

OK, I don't think my mom cared for this song because she thought it was stupid and hated when women talked like a baby..to babies and to men especially. She just thought it was the dumbest thing and "to act your age." I had to put this one in because I find it funny and it was a huge hit from the musical "Good Boy" where the great Helen Kane sang it. This became her signature tune and, in the clip above, it is Kane's voice, not Debbie Reynolds (from the film "Three Little Words"-1950) that you hear although Debbie makes me laugh every time she grabs this guy's shirt and pops his bowtie (well, that sounds suggestive) Carleton Carpenter was the young man who just passed away on Jan. 31st. The film was written by Herbert Stothart & Harry Ruby with lyrics by Bert Kalmar (yeah, I don't know them either) and has been sung many times over the years. One of the more famous times is Marilyn Monroe singing it in "Some Like It Hot." By the way, Helen Kane became the inspiration for Betty Boop!

You know my mom  loved Andre Rieu and I was so happy that I could bring her to see him twice. Later, when she was in a long-term care home, she called him her boyfriend and would smile like a little devil. This is one of my favourite pieces of music which fits since the Olympics are on and Torvill & Dean won the Gold Medal ice dancing to this piece. When I watched this with my mom, we were floored! It's a great piece of music done many times over.

I could have gone with the famous version done by Bobby Darin or Frank Sinatra etc.. but this song was composed by Kurt Weill, with lyrics by Bertholt Brecht, for his wife Lotte Lenya. This song was featured in the musical "The Threepenny Opera" and  which, thankfully, came out before the man who shall not be named. rose to power. I know my mom was not a lover of this song either but, hey, it came out the year she was born and was a huge hit in Germany and everywhere else. By the way, Lotte Lenya played the evil Gal in the James Bond film, "From Russia With Love."