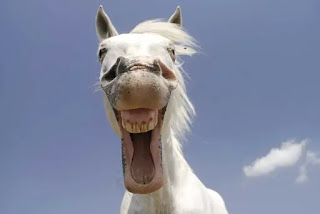 April is done so it is time to move forward with, hopefully, no more snow. I miss my furbabes but they gave me such joy like any animal does..I mean, look at this horse! I thought about "Happy" and each person will try to describe it and we can agree with what you feel, experience, say but your version of happiness may not do it for us. Music can bring so much happiness but some love heavy metal which drives me around the bend especially when their voices twerk to a devilish sound. Here are 3 songs I thought of that make me happy..

Judy Garland just came from a sanitarium to squelch her drug habit which she did. She gained weight but felt happy and content. MGM decided to make a film with Judy called "Summer Stock" starring Gene Kelly which, is not a great musical despite some memorable musical performances. When we first see Judy, she is sitting on a tractor singing blissfully in her overalls and one is shocked by her weight gain (shame on me for thinking that way). When the film was done, they placed Judy on a strict diet and, to deal with the stress, she went back to the pills. A few months later, she was quite svelte and, needing another number for this film, she did this one, which was written by Harold Arlen with lyrics by Ted Koehler back in 1930 and introduced by Ruth Etting. The funny thing is she lost quite a few pounds when she did this song only to have gained it back 4 minutes later. Gotta love the movies.

I always remember when Barbra was on Judy Garland's show and they combined their 2 big hits together to create something special. I believe I showed it on my blog last year sometime. Anyway, this song was written by Milton Ager with lyrics by Jack Yellen in 1929. It became mega famous when FDR used this song for his campaign trail and it became his tune..thankfully he never sang it. Funny that this song was created the year the stock market crashed bringing in the Great Depression.

I bet we have all heard this song before because it is used in many films and even commercials. I think Jimmy sings it best because he puts so much heart into it. It was actually created by the famous pair Adolph Green and Betty Comden with music by Jules Styne for the Broadway show Do-Re-Mi that came out in 1960.

You don't wabnt to like this song but you just can't help it.

What songs make you think "Happy".