Christmas Month of Songs or Carols or Teds or Alices 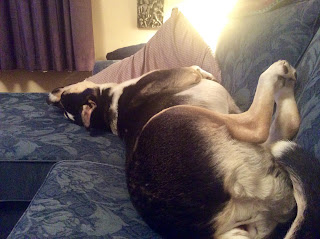 My big Gazoo, aka Harley, happily sleeping..maybe sugar plums are dancing in his head but, I bet, they are shaped like steaks. I can’t believe the Christmas season is upon us and I truly sucked this year in card making. I am making that epic fail scrapbook for my brother for almost a year and still dimly hope I can get it done by Christmas. I think I’m seeing those blasted sugar plums...I’m just choosing songs I grew up with or love from a recent  album. Here are my first 3...

This was the first Christmas album my parents bought together in late 1959 and it’s one of my favourites. This musical piece was written by Leroy Anderson during a heatwave when he was dreaming of cool temps, back in 1949. There are many, many versions of this song but I find this tempo one of the best because, often, it is done too slowly, in my humble opinion.

2. CAROL OF THE BELLS BY THE HARRY SIMEONE CHORALE-1965

This is one of my favourite Christmas songs and this version comes from Simeone’s Christmas hit album “Little Drummer Boy.” I do love this album but there are 2 songs that are just off the wall whack a doodle. The songs are fine but the versions, from this album, makes me think they all took a snort of coke before going nuts. Thankfully, this is not one of them but I may save those 2 for another time. I had no idea that this song comes from a Ukrainian folk chant called “Shchedryk” that was enhanced by Ukrainian Mykola Leontovych with lyrics by Peter J. Wilhousky.

This comes from their hit Christmas album “The Christmas Collection” with this song just so powerfully sung by all 4 men but especially the baritone Carlos Marín who, sadly, died last December from Covid. This is a French song based on a French poem by Placide Cappeau in 1843 with Adolph Adam setting it to music in 1847.

Which is the earliest Christmas album you own?