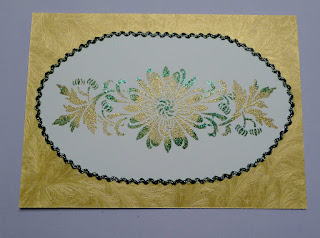 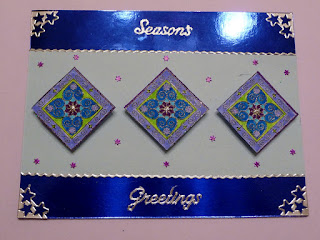 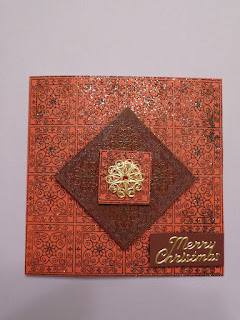 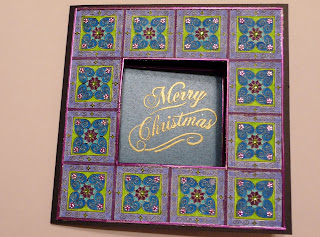 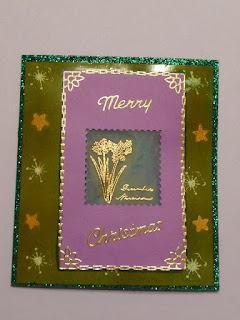 http://christmascardsallyearround.blogspot.ca/2012/04/april-challenge.html - Picture Inspired-Ukranian Eggs
http://sparklesforumchristmaschallenge.blogspot.ca/2012/04/c15-colour-combo.html - Colour Me Happy (favourite Colours)
http://christmasstampin.blogspot.ca/2012/04/winner-4-and-challenge-5-fav-color.html?utm_source=feedburner&utm_medium=feed&utm_campaign=Feed:+ChristmasStampinAllYearLong+(Christmas+Stampin'+All+Year+Long) - Favourite Colour Combo
http://abcchristmaschallenge.blogspot.ca/2012/04/g-is-for-gold-white-touch-of-green.html - Gold, White with a touch of Green
Happy, ur...Easter!? I decided to make Cristmas cards:) I still will try to make 5 cards for the CCAYR even thought they changed the rules and one only has to make 1 card. They used a photo inspiration which were Ukranian eggs. I used to make them and I love them! Every colour and image has a meaning behind it. The first card also goes with ABC Christmas. I have this stamp which reminded me of the design on some of the eggs and I used a hint of green sparkle embossing powder and Egyptian Gold embosiing powder on basic white cardstock. I cut it into an oval shape and placed it on this beautiful gold paper. I trimmed it in green ribbon. The second and 4th cards are my favourite colours and combinations. I used a stamp that reminded me of hearts and swirls on the eggs but also reminded me of the turkish tiles found on the Titanic ( I am a Titanic nut and LOVE the 1958 film version-A Night To Remember- which much better illustrates what happened on the ship than the 1997 blockbuster where the kids just kept going back into freezing water so many times...and never froze...well he did but I saw that coming..oops I digress). I coloured everything with my tombow markers. On the 4th card I cut out the center and have a peek-a-boo to the inside where it says Merry Christmas which I embossed with a gold hue. I also added tiny crystlas on the outside of that one card. The centre that I cut out I further cut the squares and used them on the 2nd card. I used a beautiful mirror blue cardstock for the backing and highlighted everything with silver stickers and the stars I painted purple. Stars are often used on the Ukranian eggs as are hearts, and swirls and never-ending ribbons/belts.
The red card I saw this pure red and black egg on the picture and loved it so I tried to replicate this using a black sparkle embossing powder and 2 different red cardstock and used pop up dots to highlight the red card and mounted a gold emblem at the centre. The final card, I call it my M.A.S.H. card due to the hue of that green....which turned out army looking...Oh well. I stamped the snowflakes in white on white glossy cardstock. I took my roller and rolled yellow on top. I stamped the stars on it and then used my green dye ink thinking it would turn out a beautiful green instead of , well ca-ca colour but I kept it. I wanted to try my hand at how the eggs are actually done. They start with what they want white first and then go to yellow, green, blue, etc... each time they cover what they want to remain that colour, in wax, to ensure the design. I tried this on this card. This card turned out to be a headache. I used vellum for the centre and I like the look of it. I used the December flower for the centre and embossed it in gold. Through another mistake I ended up putting glitter around the edges. I also ended up cutting the centre 3 times I think. In the end it is done:) What a card...It is more for a man even though there is a flower.
Posted by Birgit at 4/09/2012