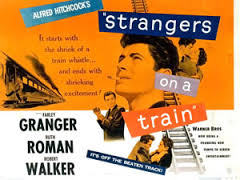 This ...is fun:) I joined a group where a film is picked on the 2nd Friday of each month, and one must watch it and give our review after. This month we each get to pick the film and another, from the group, has to watch the film. This was started by MOCK and The Armchair Squid and I saw this on Cherdo, By the Flipside's blog. This is a blog hop so I hope some can join in on the fun:)

I had a hard time in choosing which film to pick as I love so many. I love musicals and thought of picking one but my mind kept going back to this film by the great Alfred Hitchcock.  I am not going to give too much away because, if anyone has not seen this film, then you must see it!

Stewart Granger plays the hero who is engaged to the beautiful Ruth Roman (she was on the Andrea Doria) but he has a slight problem....He is still married to his skanky wife played by the future Mrs. Tate from Bewitched. Robert Walker plays a man Stewart Granger meets on the train, and he does a superb performance! He should have won an Oscar for this role. No one knows who he is nowadays but back then, Robert Walker was known as the kindly boy next door. He was a role model of sweet, good-natured innocence- remember this when you watch the film.

I won't get into the moments of this film because I would give key parts away so you must watch it and then I will talk about it at a later date. Oh and Marion Lorne, the sweet Aunt Clara from Bewitched, gives a great nutty performance in this film as well.