Gratitude for so much 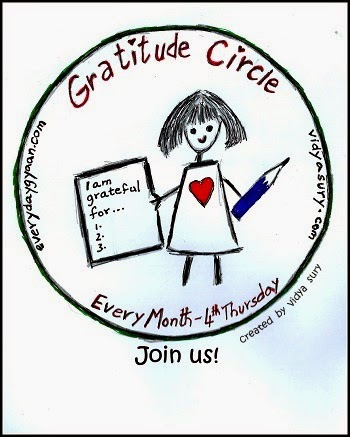 1. Health!! Now as most of you know I have been ill for over a week and, well, that sucks. You know the feeling-it starts off  with some coughing. We ignore it but as times passes the throat feels like you just swallowed a wet, moldy woollen mitten and your coughing turns to hacking. Your sweating and feeling really hot but then a wave of ice cubes  comes over you and you shiver like you just saw Justin Bieber naked.  We have all been there and, it passes and you start to feel better. Some people have chronic health issues and I do, but it isn't going to get me down! The most difficult health issues is finding the strength to continue on and be happy with the life that you are leading. I lost a dear person this past month...he was only 61 years old. He was my ex's brother and he was a good man even though he did not believe it. He did not commit suicide but he gave up on life. His marriage went over 20 years ago and he let her have his home and land- he never fought for it. From that moment, he started to slowly slide. He let the negative feelings and self-talk take hold. He began to drink more and he lived in an apartment that looked like he had just moved in but yet, he had been there for years. When his mom passed, he went further within but when his dad passed less than a year later, he was "destroyed" as he put it. He refused to look at the positive and one could see a decline that he was stubbornly and consciously aware of  maintaining...if that makes sense. His heart was not good and he had a blood clot in his leg. He told lies to people knowing they were concerned but refused to receive any help. He did not take his medicine but continued to drink and drink and smoke. He was found in bed....dead. A life he consciously made sure to destroy. It was a sad life that didn't need to be lived in this way and he didn't need to die this way. So why am I grateful? He has taught me how to be grateful for my life even when things don't work out the way I thought it should be. Crap happens...let's reflect, cry, be angry but rise above and move forward and be happy with all that life give to you.

2. My Hubby!  Now this man can infuriate me because...he can:) He will start talking before I finish my sentence. He will "zone out" while I am talking and then start on a completely different topic than what I was speaking about. He must have things all in their place because he is an OCD zombie. He has the patience of ....well he has no patience except in certain areas like his art or when he is fixing something around the house. He is my ADHD man and he deserves a cape and some nifty cute shorts to wear. He has the confidence to stand  with his hands on his hips singing the MEmemememeeee song:) I often tell him wear his throne is and that it needs a flush. This man has been here for me when I have been sick. He makes sure the house is cleaned, he has made all the dinners and has made sure I am resting. Earlier in the month, when my friend came over, he cleaned the whole house so I would not have to worry about that when I came home from work. He made sure I took my medicine and rubbed Vicks on me. When I looked like something from the Amnityville Horror, he still looked at me with love in his eyes...awwwwwwww(ok don't wretch). He is also a brilliant artist and I will showcase some of his works in May. He has made me some beautiful things that I adore.

3. My best friend! She and I are soul mates  and I love her to bits...besides she knows where the bodies are hidden:) We can finish each other's sentences and we will be thinking about the same thing almost at the same time. We have known each other since 1985 and have gone through ups and downs but always together. Her children are finally of age where she can escape, I mean, travel with me on little adventures. We just went, last year, to the Jimmy Stewart museum and the Lucille Ball museum and enjoyed every moment. This month, she came over and we had a sleep over because big kids can do this too! We watched "Harvey" (with Jimmy Stewart) and a couple of Carol Burnett shows (Went With The Wind) and laughed and laughed. Laughter with your best friend can't get any better.

So there ya go my top 3 things to be grateful about. I am looking forward to the A to Z challenge, warmer days (had snow today), creating cards, my animals, my OJ and soda water and movies:) What have you been grateful for?