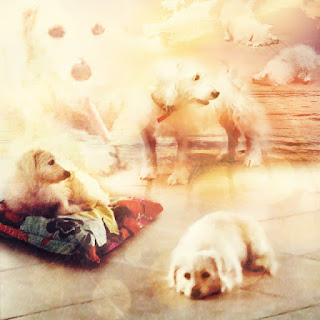 I have never done this before partly because I didn’t know how it all works (she e-mailed me her post and I saw all this gibberish which is computer talk so I hope I did this correctly) but I felt this is important because she rescues dogs on her home island of Curaçao. I first blog met Guilie Through The A to Z Challenge and was so happy to have done so because I believe in her fight and her vision. Trying to save dogs, cats or any animal is noble and important and very difficult since many don’t want to be saved due to their mistrust of humans, one lives the heartache every time one sees an animal in distress, not all animals make it and one has to deal with the nasty part of human beings. By the way, I hope Guilie doesn't mind, but she recently lost a furbaby which I posted the picture above. I will speak about my favourite dog film after hers.


Thank you so much for having me over to talk movies, Birgit! I've long been a fan of this cozy space you have here—to say nothing of your crafts; you have a wee talent there, my friend!—so I'm thrilled to get a chance to contribute a bit to it.

You'd think that, being such a dog lover and all, I'd be first in line at the box office to watch anything with dogs in it. Alas, that is not the case. The prospect of a dog movie gives me that sinking feeling that most people associate with the moment at a roller coaster when you're all strapped in and just waiting for the thing to start rolling.

Part of it is that I can't help worrying about the dog actor/actress. Were they treated kindly, were they mistreated (remember "https://www.hollywoodrep orter.com/news/gavin-polone-a- dogs-purpose-outcry-what-happe ned-whos-blame-967160" that awful scandal around A Dog's Purpose; fake news in the end, but it's every animal lover's worst nightmare)? Were they trained using positive reinforcement or were their fears preyed on for the sake of the production? This is what I obsess over during every scene that has a dog in it. Every. Scene.;No, not pleasant.
And I dislike the heartstring-pulling. Dogs seem to get cast in movies mostly for the purpose of engaging—and manipulating—the audience's emotions. But my heart can only take so much dog (and animal) suffering, and, as a rescuer, I see too much of it already on a daily basis.

So, yes, I hesitate. 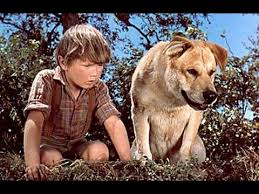 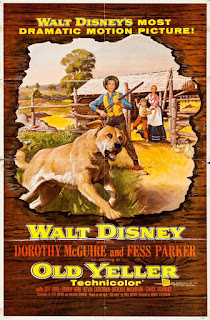 The all-time Olympian champion of heartstring-pulling, the most shameless of all manipulative tear-jerkers ever brought to the screen. Seriously, Pollyanna does not hold a candle to this yellow dog's story. I love it to bits anyway. I can't watch it (especially not the end, never ever again the end), but I love it. Maybe it's nostalgia. Maybe it's the 'found dog' idea (I've been rescuing since I was 8). Maybe it's the 'boy and his dog'...

I grew up an only child, and my one constant companion was a wonderful Boxer named Cookie (Cuca for short) whom I adored and who adored me right back. No raccoons or bears or rabid wolves; our adventures were much tamer than Travis's and Old Yeller's, but their camaraderie still resonated.

And maybe that's where the value of this film is. The relationship between boy and dog is not just central to the plot; This is, at its core, a film about the lessons a dog—loving a dog—brings to our lives.

This one I'll watch anytime, anywhere. I'll stop channel-surfing if I catch it on TV. There is no tear-jerking here, no dying (well, almost no dying)—no, this one has humor! And a happy ending! (Sorry for the spoiler, but for us too-sensitive animal fanatic rescuers, the happy ending is a must!

Don't be fooled, though. This film may look like a pet version of Toy Story (the comparison just begs to be made), but it goes far beyond that. "The Secret Life of Pets" does something really special: it captures animals in all their wonderful, quirky uniqueness. Each of the animals here—dogs, cats, goldfish, parakeet, psycho bunny—has their own distinct personality but never fails to come across as a realistic representative of their species. The way the cats play, for instance. The dogs' body language. Their rationale, their relationships with their humans... It's all recreated to a T.

I love it because it brings to life the amazing diversity of the animal world, because it does that in incredibly funny ways, because it never loses sight of the basics of animal welfare—and because it deals with the issues of cruelty and neglect and human ignorance without making light of them but still keeping it easily digestible. When it comes to animal welfare awareness, it's films like this one that end up making a broader impact.

(And because of the soundtrack. That 'Grease' cameo in the sausage factory—and when was the last time you heard Beastie Boys in a film? An "animated" ;film? Oh, and because of the strong female lead—even if she started out as a ditz, but that was her journey. And, above all, because of Psycho Bunny.)

Of course I still cry at the end (and throughout, really). But it's the good tears.< 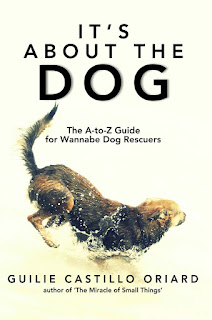 Birgit, you were one of maybe three full-steam-ahead supporters back in 2016 when I wrote the original blog series that would, eventually, become "It's About the Dog: The A-to-Z Guide for Wannabe Dog Rescuers", and I'm forever grateful to you for that. Without your encouragement and enthusiasm, I probably would never have dared to even imagine turning it into a book. I'd certainly never have had the motivation! I can't thank you enough for hosting me here today, and I look forward to chatting with you and your readers in the comments. I'd love to know if you've seen these two films, and what you thought if you did, and if you have any favorite dog movies. 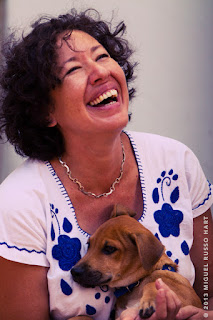 Guilie Castillo, Mexican expat, writer, and dog rescuer, is the author of

This post is a part of, "https://lifeindogs.blogs pot.com/p/the-dog-book-blog-to ur.html", The Dog Book Blog Tour; during April and May, author and book will be making the rounds of dog-loving sites on the blogosphere to talk dogs and rescue—and to give away THREE signed copies. (More about both tour and giveaway "https://lifeindogs.blogs pot.com/p/the-dog-book-blog-to ur.html")

I planned on creating a couple of dog cards and will do so and, when i show them here, I hope Guilie will accept these cards as a gift. Ok my favourite dog movie....

This film started the whole Lassie series and this dog was amazing! When I saw this film, with a young Roddy McDowell and Elizabeth Taylor, I was riveted about a collie taken away from the boy Lassie loved, and her way back home to the boy. The ending makes me cry every single time. Yes, it is manipulative but in the best way and, let me tell you this dog was treated well off camera.

I have to give a mention to the Dog that started  it all regarding great dog adventures and, the rumour is this dog won the best acting Oscar in 1928 but, the bigwigs didn't want Oscar to lose credibility, so they gave the Oscar to a human-Emil Jannings.  Let's here it for the puppy saved by an American during WW1  in the trenches to become the biggest name in Hollywood during the 1920's...Rin-Tin-Tin

I hope you enjoyed this post and please check out Guilie's blog and her book which is excellent.
Posted by Birgit at 5/23/2018