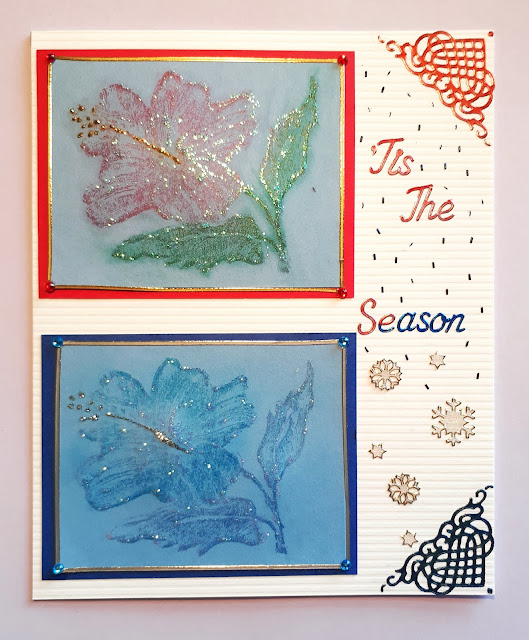 Color Throwdown-Red, Pink, Bright Median Blue, White-CTD605
Sparkles Monthly-Red, White & Blue
I am back to work but had such a fun time and could create some cards in the process. There was another challenge that I missed to create 2 seasons on one card so I thought of Summer and Winter when rain turns to snow and how I wish for snow. Yeah, yell at me all you want but I prefer that over this dreaded heat. I tried  out my perfect pearls on the blue cardstock and it didn't turn out half bad. The stamp is pretty and the pearl dust adheres well to the versamark stamp. I cut it out in squares using red and the blue and placed it on the nice white card stock. I took sticker pieces, marking them up in blue and putting them down to show rain. I had some snowflake stickers followed by the 2 border stickers that I coloured in blue and red. I finished it off with some small gems. 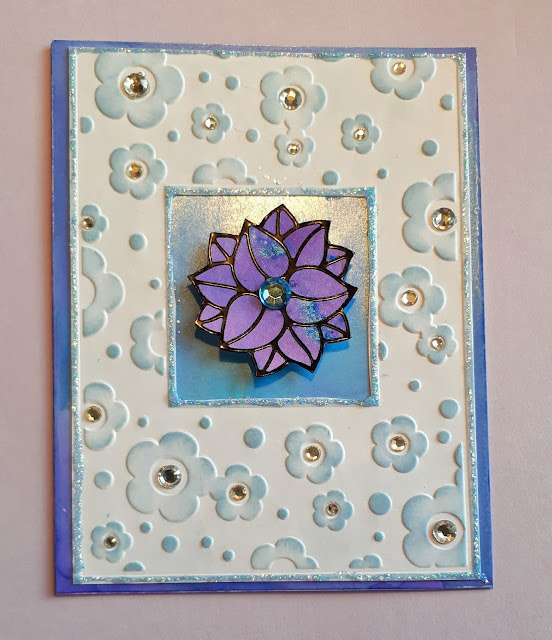 Tic, Tac, Toe Challenge-used the middle row-Blue, Square,Flower tttc075
Crafty Creations- Anything Goes
The Flower Challenge- Add Some Sparkle
This was a quick card for a birthday. I had used the embossing folder at a session I took a couple of years back and never used it until today. I took a blue inkpad and gently swept the color over the raised areas to colour the flowers in blue. I took my exacto knife and cut out the centre. I had used alcohol inks in blues, one being a pearl to create the background and glued it in place with just the centre and outer edges showing. I had a remnant piece of purple and blue colour bursts that I tried on paper and placed the flower sticker over top and cut it out and placed that on the centre. I took my lovely stickles and placed that around the borders. For a final touch I used diamond crystals for the flower centres. 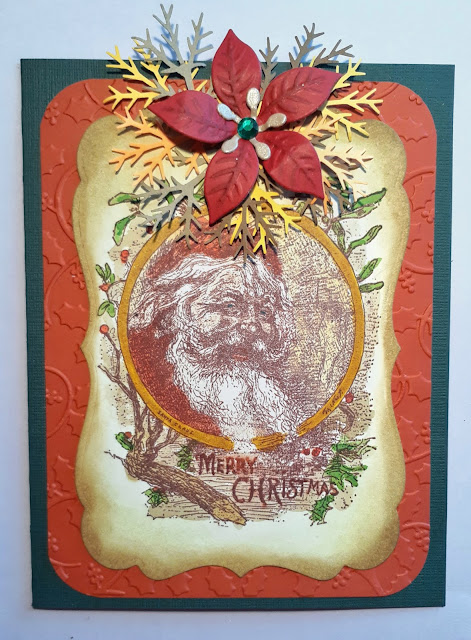 CCAYR-Use Fall/Autumn Colours
Christmas Craft Creations-Xmas Characters
Santa is always a bit of a character isn't he? He breaks into you home through the dirtiest way possible and leaves presents but does demand cookies and milk. I wonder if he wouldn't mind some Baileys in that milk because he must get cold swooshing through the sky in an open sleigh. I used green and orange cardstock for the background. I had this Santa stamp for a while but never used it until now. I stamped him in apricot brown and coloured him in using the distress inks with water. I edged the sides (after using a die cut to create the shape) with different coloured  distress inks to give that distress look. The poinsettia and leaves were cut using the sizzex and a punch. I glued that in place with a green gem for the centre. 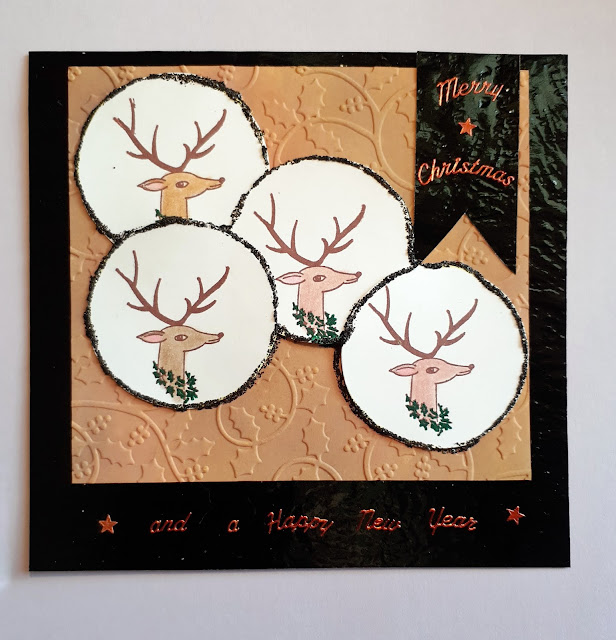 Christmas Card Throwdown-Sketch Challenge
Simon Says-Your Favourite Tool(stickles)
CHNC-Reindeer
Stamping Sensations- Make It Masculine
These are the reindeer that didn't make the cut-Rex, Gottlob, Beatrice and Gaylord. After stamping these 4, I used a shotglass to circle and cut them out. I coloured them with my gismo pencils and set them aside. I had fun using distress inks to create a terra cotta look and placed it in a holly embossing folder and put it through my cuddlebug to get that design. I cut out the black shimmer paper and glued all in place trying to emulate the design from Christmas Card Throwdown. I coloured the stickers in red, orange and brown to try to create a similar colour and placed this on the card. All done! This colour combo was actually for Color Throwdown from last week but I missed the deadline which is typical of me. I love stickles and gems and you see them often on my cards.
Have a great day everyone!
Posted by Birgit at 8/05/2020