Love in the Music 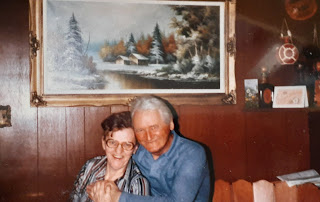 You have seen this picture before but, since I am going all lovey-dovey,, I thought seeing 2 people in love (my parents) just fit. Love is in the air and I went the movie route...big surprise.

1. LOVE THEME FROM SOMEWHERE IN TIME BY JOHN BARRY-1980

I saw this film when it first came out because I had a big crush on Christopher Reeve and I thought Jane Seymour was so beautiful plus it had the fantasy element. An old lady comes to Richard, after his play's success, hands him a watch, and says "Come back to me."  8 years later, he decides to take a side trip to an old hotel and comes across a picture of a once famous actress and learns it is the same old lady that came to see him many moons ago. He falls for the lady and finds a way to travel back in time. A love story ensues which is one that I do like. This song is throughout the film as well as the "Theme of Paganini" by Rachmaninoff an equally great piece of music.

I love this theme so much as well as the soundtrack, which I have in CD (yes, I still own CDs, my preferred way of listening to music). This was also composed by John Barry for which he won an Oscar for best score. It is loosely based on the love affair of Baroness Karen Von Blixen and Denys Finch Hatton while she was married to Baron Hans Von Blixen. I have tried to watch this long, epic love story but ..ughhh. First, I found Meryl Streep boring as dirt and her Danish accent irritating. I loved the cinematography but I don't like seeing the killing of any animal even if none were hurt during the making of this film. It's just deplorable how many animals have been taken for trophies. Robert Redford is nice to look at but I loved Klaus Maria Brandauer as her husband. I will try to watch this again but, we shall see.

Oh man, yes, I picked this song and the film more than once, but I just love it and it works so well with my theme. I didn't want to go full John Barry anyway. Boris Pasternak wrote the story based, somewhat, on his great love affair with Olga Ivinskaya. He wrote the book in 1957 which was smuggled out of Russia where it won the Nobel Prize for Literature in 1958. To save his family and mistress, he had to decline the award. To keep them apart, the Russian government often had either Pasternak arrested and sent away or Olga was sent to the gulags. After he passed away, with thousands of people attending his funeral, Olga asked for the love letters Boris sent to her but the Russian government declined. This is a very famous piece that runs throughout the film and justly so which also won for best score, as well, at the Oscars.

Which Romantic score from the movies captures your heart?