Winter is Here and We Can't Fly to the Dominican 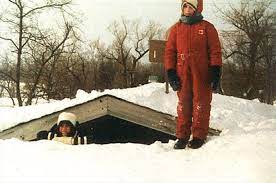 Nope, this pic is not of me and my brother but this is showing what happened during the Blizzard of '77 which hit with a vengeance between January 28th to February 1st with hurricane force winds forcing people to stay in their cars, homes with no heat, or work and many people died. We lived in the heart of this storm but, thankfully, we never lost our power. I got home, by bus, just in time and my brother was home as well. Many kids were not so lucky and had to stay at the schools. My ex's brothers were out on snowmobiles trying to rescue people trapped in their cars and they had no clue if they were driving over a car, home or ready to plunge over a huge drift. The drifts were 30 to 40 ft and I had great fun, with a couple of friends, dipping below the hydro wires to slide down with my snowsuit on.

2 weeks ago we got hit with, almost, 2 feet of snow and, I know, many of you on the East Coast got blasted with snow, rain, ice or a mix...just lovely. We are supposed to get more snow this Wednesday but not near what we had 2 weeks back. So, in honour of the areas we live in, here are 3 songs to put a smile on your face or you can rant at what you will hear. Since we can't travel much, let's embrace where we live...

I like John McDermott who is just a great Canadian singer and I found out he sang this song written by Doug Wass & Michael P Lococo. Have any of you been in a horrible storm, snow or not? Let me know:)

Yes, we think of it as a Christmas song but, there is no mention of Christmas in this song written by Sammy Cahn (lyrics) and Jules Styne (composer) in 1945. There was a major heat wave going on in the summer of '45 so these 2 men decided to think of cooler temps and created this song. So many people have recorded this that it would be interesting to see how many are actually out there. Which ones, do you feel are the best and which are the worst, in your opinion?

I love this beautiful song written by Leroy Anderson  back in 1946 during a heatwave (hmm...sounds familiar) and finally finished it in 1948. There are lyrics to this song but I prefer the one without lyrics. Again, this always comes on at Christmas, but it is just about having a joyous sleighride. I had one, once, when I was a kid, and it was not that snowy, quite mucky actually, and my feet were freezing. I prefer the memory my mom told me. Her grandfather (on her mom's side), would hook up the sleigh, add plenty of blankets plus warmed up bricks for the feet, and travel through the snowy wonderland while her grandfather would sing. That is a much nicer memory. Have any of you ever been on a sleighride?

So, I hope all of you are having a nice time, inside or out, maybe with a nice hot toddy or, my favourite, Feuerzangenbowle(I dare you to say this 10 times fast). If you want to know what this is read it here.

On a sombre but, hopefully, joyous note, there is a blogger that passed away at the beginning of January, from covid, sadly and his name is Jeremy Hawkins. I did not know him nearly as well as many of you did, but I always liked looking at his blog and he was a huge help with the Blogging A To Z and the IWSG site where he created  logos, banners, t-shirts etc.. He loved some zany movies and heavy music which may not have always been my style but I appreciated his creativity. he will be missed by many. I hope you go and check out his blog to get a sense of the man. Enjoy all you can up in the heavens...

Stay Safe everyone and enjoy your day!