Sandra Cox is one lovely lady with a heart as big and sweet as anything you can imagine. I meant to have this up sooner but stress got in the way. We lost another dear furbabe, Lucy, this past Sunday. I will talk about this later, for right now, let’s celebrate Sandra’s new book reveal. Have a moment to visit her blog as well, she deserves all the accolades.

Behind the amicable façade is a man who’s tough and determined. He’s Mateo’s Blood Brother.

*Mateo's Blood Brother is a sequel not a stand alone. 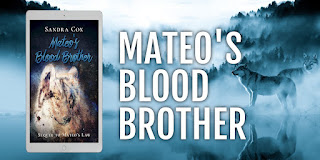 They were friends, close as brothers. Then they weren’t.

Mateo and Jesse are cautiously working their way back to friendship when Jesse discovers the unthinkable. Delilah, the sultry shifter who’d had affairs with both men, is still alive. The tumble she took over a mountain ridge—a fall that nearly killed Mateo—should have finished her.

Now, there’s no choice but for the two men to work together to take down a she-devil straight from hell.  As the stakes escalate and the hunt becomes more intense, another wolf appears on the scene. Always where Jesse’s at. Always when he’s in trouble.  Jesse is divided between ending Delilah, a new love interest, discovering the identity of a certain brown wolf and staying alive.

Jesse and Blair (Mateo's chief deputy and fiancee)  both like to catch the Full Moon Band, that plays hard rock with a native twist, on Wednesday nights at the Blue Coyote.

Popular with the ladies, he managed to avoid any serious entanglements until Delilah.

I hope the pictures come out aok.