Spring! Where Art thou 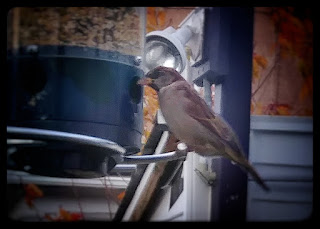 So I'm at my new office in the Falls but I am stuck as I have no proper hook up between my monitor(older) and the computer (newer). The Purolator is to be here by latest 10:30 tomorrow. Last week was crazy and I felt like a ping pong ball as to when I would be up in Miserysauga or here in the Falls(too long and boring to explain).  Oh well, I hope I do aok once everything is working. On Saturday, I did my groceries and came out just when it decided to rain or was it sleet, or hail? It was Crap that's all I know and it gave me the idea for my music post especially since it turned sunny after I got into the car. I'm not using "Singing in the Rain" even though I love that song and the movie because I'm afraid I will have to bitchslap Gene Kelly.

I believe this was from her TV show but to hear a better recording is from her legendary Carnegie Hall concert but I couldn't find it through blogger. This has been done many times especially by the great Billie Holiday but Judy introduced me to this song so this is why I chose Judy. This song came from a Broadway Musical called St. Louis Woman which ran for 113 performances. It was written by Harold Arlen(Music) and Johnny Mercer(lyrics).

2. THE RAIN IN SPAIN SUNG BY JULIE ANDREWS AND REX HARRISON-1956

Julie Andrews originated the musical performance of Eliza Doolittle in My Fair Lady but, since she was not a famous movie actress, she was left in the dust by the studio and gave the role to Audrey Hepburn. This Lerner and Lowe musical became famous resulting in an Oscar nod for Audrey Hepburn but she lost that year to....Julie Andrews who won for Mary Poppins.

Isn't this pretty? I think it is but I love Enya and have a couple of CDs of hers. This was actually written by Amy Lee when she was still in high school and was released in 2000! She is a co-founder of the rock band, Evanescence. I listened to this one as well which is pretty neat and doesn't truly sound rock to me.

Having rain, hail, freezing rain, sleet? What Rainy songs can you think of?