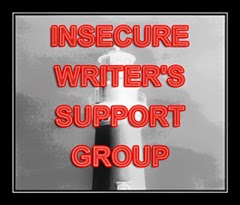 This is the time, the first Wednesday of each month where all writers..or me let all their fears, insecurities, joviality all hang out and join in at the IWSG. This was created by Ninja Alex J Cavanaugh, and I believe, it has helped writers immensely.

I love to partake in this event and, even when I thought,,why? I am not a writer or spiller of wisdom for writers, Alex just said you are welcome and write what you like. Isn't that just nifty? I love that and so here I am about to talk about a certain wedding I went to a couple of decades ago...the stripper wedding.

Now we have all been to weddings where they all meld into one big ball of waxy build-up from the flowers to the "never going to wear that bridesmaid dress again"  to the meringue white concoction called a wedding dress that is usually hideous (you know I am right). We have sat through the speeches of half drunken bestmen to the fathers who ramble on about god knows what while we all toast several times after eating a meal of either beef, chicken or fish (unless it is a buffet..which is still about the same meal). We also have danced the chicken dance and the Macarena and Twist and shout and Rock and roll and a polka or 2. Very few weddings stand out but the stripper wedding did, in so many ways, take top honours for the tackiest wedding I have ever been to and I loved every minute of it.

It was our neighbour's son who was getting married. My brother and the neighbour's son, we shall call John, were buddies all the way from little kids until they found true love (my brother is divorced) -John found the love of his life. How? One might ask, well in a most Sound of Music romantic way....he was a pimp for her and 3 other gals that he would showcase to the strip joints around the peninsula. Is that love...or is that love?

Naturally, they had a child first (as my dad used to say, first baby comes any time, the 2nd takes 9 months) who was about 9 months old or something like that, the child was not too important in this story so let's leave the kid out of it (poor kid), when they married. It was a good old fashioned Polish wedding where the drinks were 3 parts vodka to 1/2 part orange juice. The church (yup, Church), was decked out in wonderful plastic flowers, the music started (nope not the stripper song but could have been) and the bridesmaids, in bight red sequined outfits, sauntered into the church swinging their hips and having that pucker mouth that fish do so well. I mentioned to my sis-in-law (2nd wife of Bro) that I felt they forgot what aisle they were walking down. Finally we see the bride, all in white, nope not ivory or pink or baby blue, white as the driven snow (and why not!) walking down the aisle with all the puffiness that any marshmellow would be proud. The service was long and in Polish so I dozed off a bit there..one can add in interlude music here if you wish.

Once this was done, we all went outside and there I thought I saw Casey Kasem's wife (you know Loretta from Cheers). She was wearing a tight pencil skirt with a gold sparkly tight top with huge Napoleon military, shoulder thingys with beads hanging off. Her platinum long hair done up with a white scrunchy on the side of her head (I am certain she could pick up South Korea with that hair) and the Come F$# me heels that were sinking into the grass. We left that splendid site and went to the hall.

By this time my sis-in-law and I were trying to figure out which gal was a stripper and which one wasn't. My ex said "Oh wow, here come 2 strippers now". We turn our heads so fast we almost get whiplash and we see 2 elderly Polish ladies not a day over 140 walk in, arm in arm, looking for their seats.

The dinner(who knows-chicken or beef) was non descript and the vodka was getting to my head or the Baby Duck that was being served for wine(I didn't mind that actually). In between the lull, my ex and I went to look at the cake. There it was, in all its glory-3 tiers surrounded by "gold" pillars and the fine wires that drop oil beads down it as if it was rain. Did I mention it lit up inside as well? Yup it lit up and the bride and groom at the top were circa 1974. I mean the plastic groom had a frilly shirt in light blue. My ex just looked at it and said "Oh my, Beam me up Scotty".

We took our seats and finally the music was coming. I thought, this can't be messed up....but I was wrong because instead of a DJ they had a Polish Elvis. You think I can make this up? I can't! He tried to sing, really, he tried but my ears were ready to implode especially when he started to sing a Beatles song that just missed every musical note one can think of.  After an hour or so of said Polish Elvis, the Bride and Groom were going to throw the bouquet and the garter. The bouquet went up and I saw the women grab for these plastic flowers as if it was some sale at Macy's. The garter? I shake my head because  there went John under his bride's dress to retrieve this garter and he stayed...and stayed...and stayed....and stayed. I think most older people left by this point hoping to burn their eyes out with a poker. I just watched, with vodka soaked eyes, as she smiled  and sighed. My ex and I placed a bet how long this would take. Finally the vomit inducing  affair ended and the garter was thrown which no man picked up.

My mom, witness to this all, had a face of disgust on her  that did not leave for a week while my ex and I just laughed and we knew this wedding would be one for the ages.

Did it last? Quicker than you can say Get thee to a room and wash your mouth out with soap, they separated. Where she went...who knows but hopefully she found the golden pole of happiness. John continued down his merry path to prison and is around ....somewhere. This child is now around 20 or something and hopefully doing really well.