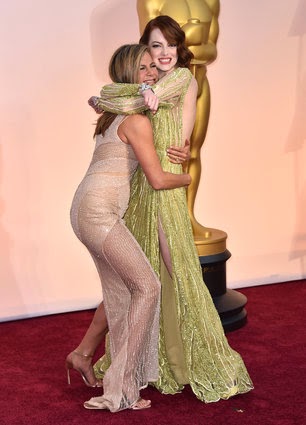 Yes the first thing I thought about was...who's humping who? Red Carpet "fun" at last night's Oscars. In case anyone cares this is Jennifer Yawn Aniston and Emma  Stone. Now it started pouring rain at L.A. yesterday and it would have been such fun to see all that hair, make-up and gowns/suits go down the drain with the water but they were all under tarps baking.
Honestly, the media have to stop saying "Who are you wearing?" because if I was actually there (like that'll ever happen) and Billy Barty was still alive, I would ask him to jump on my back and say I am wearing him. I might have to just hire the little guy from "Game of Thrones" unless he beats me up.
The awards started with a pretty good song number with Neil Patrick Harris, Anna Kendrick and Jack Black and then Neil started to talk and try to do comedy. He sucked. He went on about his tally list in a briefcase and talked about it all night long only to deliver one giant egg. My favourite part of this is when he tried to get Robert Duvall into this mess and Mr. Duvall just looked at him wondering what the hell he was asking and that no one cares. Did I mention he sucked?  Please bring back Ricky Gervais-he has no filter and gives stabs to the audience which they need.
As per normal, it dragged on long but that is to be expected. I always loved the "In memoriam" which was done quite tastefully. I was expecting to see Joan Rivers and Elaine Stritch but they were not part of this which I think is a bit sad. Each best song nominee got its due and I am very grateful that "Grateful" didn't win. Everyone talks about the song from Selma and it is unique and well done but I don't like rap. I would have preferred "I'm Not Gonna Miss You" which came from the documentary about Glen Campbell who is suffering from Alzheimer's. I am not a country music fan by any means but I found this original and poignant but this may strike home for me because of my mom. I also felt I was being manipulated by the song from Selma. If I don't care for it or if I criticize it then I am a racist. I don't like feeling that at all.
I love the Sound of Music so when they introduced Lady Ga-Ga to sing the highlights from that film I was cringing......she nailed it! She surprised me 10 fold with her strong voice and I was glad they highlighted this film even though it made the Oscars longer. Some of her diva faces made me laugh so you will just have to google it and see for yourself.
John Ravolta was in top creepy form touching Scarlett Johansson  on the red carpet (google it) to groping Idina Menzel's face when they were ready to present one of the awards. Is it just me or does his hair come from Eddie Munster or one of the characters from the Lego movie? I could have done without seeing Neil Patrick Harris in his undies. I get the whole Birdman thing but you're pasty  and leave not much to the imagination.  Oh and speaking of Birdman-Michael Keaton is getting ready for his next role...as a cow! He kept chewing gum all night I just was waiting to see a salt lick being placed beside him with all his Kenatching (My mom used to tell us to keep our mouths closed and to stop Kenatching).
So here is my own list for the 2015 Oscars...
Best Dressed
﻿ 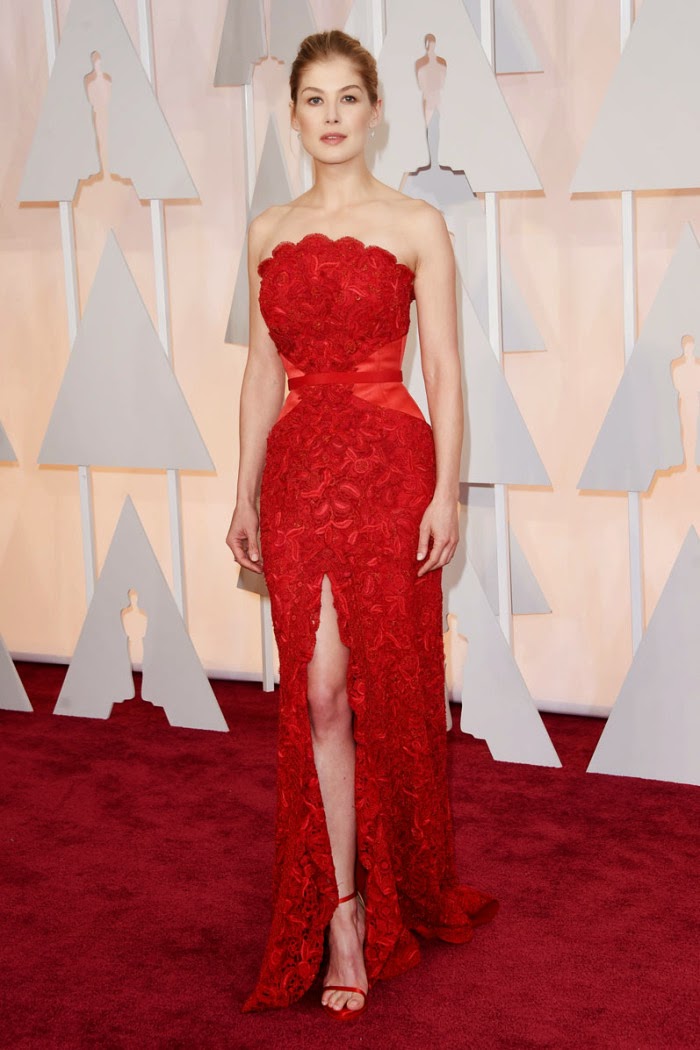 There is a slit but it is not up to cl$t so this makes it classy and a bit sassy:) I am one for necklaces so I would have loved a small diamond necklace just around  the bottom of her neck. I know...like you care:) I also loved J.K. Simmons even with his hat, American Ferrera and Jessica Chastain even with the drape in front. 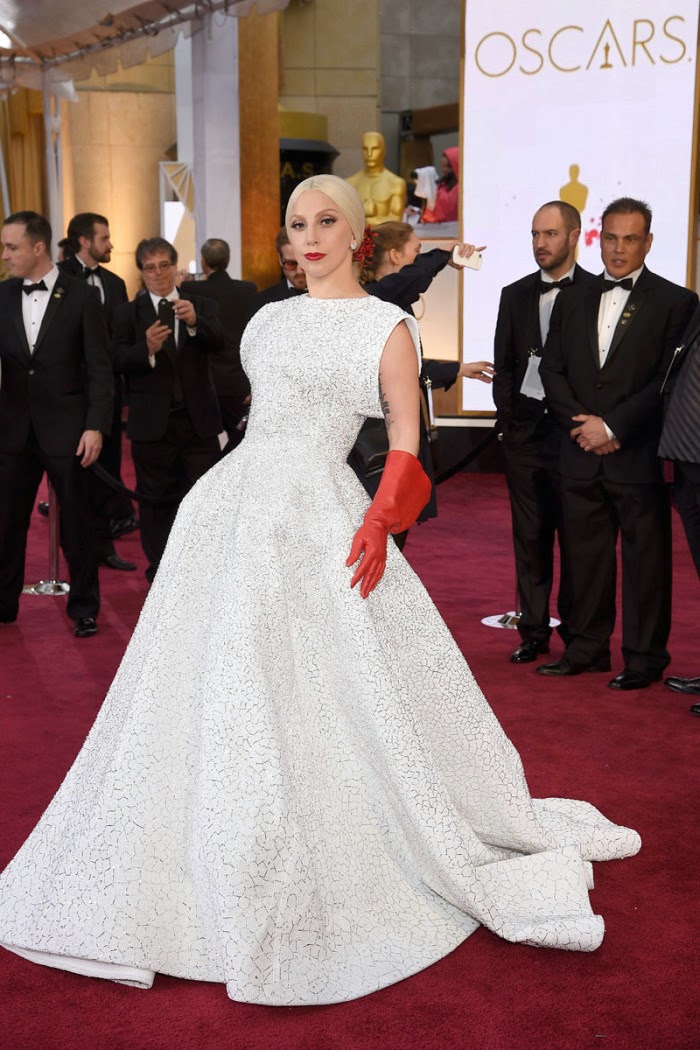 How much she giveth:) I think it was swell of her to get down on her hands and needs and clean the floors and then do all the dishes for the food that comes after the awards. She needs her hands  to be so soft..she should get Palmolive. The hair she took from some Jane Austin novel or Melanie Wilkes and that dress....is it just me or did she take it out of a paper doll book? There were many more from Gwyneth Paltrow's shoulder bloom of pink hell to Nicole Kidman giving her best impression of the undead. Jared Leto in a pale blue concoction of 70's ick, to David Olijeco (how does one spell that name) red pimp outfit (Yes I went there) that only needed a big ass hat with a feather, together they were a gay wedding cake  of "manly" bliss. There were so many versions of beige or pale blah from Jennifer Aniston to Viola Davis to Oprah...please pick a colour! Oh and J.lo's dress was so large I thought someone would pick her up and grab some toilet paper from  underneath. She had the cut down to there in front as well and her ta-ta's looked squashed. Moving on....

Which Film Happy that it won- Easy..Birdman...why? Because it wasn't Boyhood! Yes I danced when that over-hyped film didn't win. Birdman may not be my favourite film but I am still happy it won over Boyhood. I am also happy that The Grand Budapest Hotel won 5 awards. This is one film I love.

What film/person was Ick to win- Eddie Redmayne won. He did a good job in the film but he is no Daniel Day-Lewis (My Left Foot) and he kept reminding me of a Young Austin Powers in the film (Moley, Moley, Moley..). I don't believe his humbleness either-it strikes as fake to me.

Best Acceptance Speech- J.K. Simmons who spoke about calling your parents! No texting or e-mailing but calling. Graham Moore, who won for best adapted screenplay, for "The Imitation Game" who spoke about how he tried to commit suicide when he was a teen because he thought he was too weird and didn't fit in. He proceeded to tell the kids who might be watching to embrace who they are and they will go far.

What Drug were they on- Laura Poitras who co-won for Best Documentary for Citizenfour. I just kept staring at her wild, nutty eyes. They kept popping out so large when she was giving her acceptance speech I thought they would fly right out of her head. Patricia Arquette's speech seemed to wander but she hit a high note at the end with equal pay for women. Her hair looked like just had bathroom sex with Jared Leto. Meryl Streep loved her speech because we all know Meryl doesn't get paid well.  Robert Duvall looked like he needed a nap.

Which actor do you want to see get slapped?- Oh there are line ups for so many. Michael Keaton to dislodge the gum out of his mouth. Jennifer Aniston  just because. Eddie Redmayne who says the right things but looks so smarmy that I don't want to slap him as much as I want to punch him. John Ravolta for touching...ick.

Most Gaudy-aside from John Legend's wife who had slits from down to there to up to there...how does she sit or bend down? Most men would drop something just to witness this. J-Lo's taped boobs. The song number "Everything is awesome" from The Lego movie. It was tacky, it was sad, it was everything 70's bad and I enjoyed the horror show of this number.

So there is my lengthy post that I hope some of you read all the way through cos it is lengthy:)