My Film Choice is "What's Up Doc" 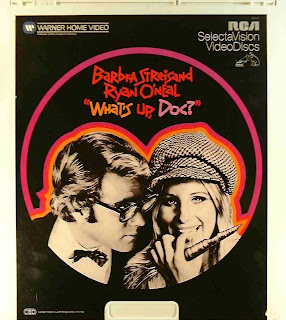 Some of you guessed last week's trivia film right! Congrats to you:) This means you have seen this film and what a film!! I love it!! The Mock and Armchair Squid have created a film society where, each month, we review a film. This is mine.

The answers to my questions are 1. Barbra Streisand who acts, sings and directs. 2. Great Screwball Comedy and 3. Introduces Madeline Kahn

Bogdanovich is a lover of old Hollywood, the Silents, screwball classics and anything dealing with film. This film pays homage to the great screwball comedies of the 1930's but also has classic moments taken from the silent era especially when viewing the great chase scene near the end of the film.

It begins with a bag, no I am not talking about an old lady, but an actual bag-4 bags to be exact which are all the same but carry something completely different on the inside. One carries clothing, The other priceless jewels, the 3rd Top Secret documents and the 4th Howard Bannister's Igneous Rock formations. Howard is engaged to Eunice Burns played to the hilt by the brilliant Madeline Kahn but is pursued by Barbra Streisand who brings trouble in all forms. It was written by Buck Henry, David Newman and Robert Benton who should have received Oscars for their Screenplay. This film is listed in the 100 best all time best comedies from the American Film Institute (AFI).

I first saw this film when I was maybe 10 years old and would watch it every chance I could get. There are so many great scenes from the "Burnsie" scene, the Hotel room scene, the "charm" scene between Sorrel Brooke and Mabel Albertson" and the huge car chase scene in  which this is the first time that stunt men got film credit and rightly so. In fact, the one guy in the back seat of the convertible  was knocked out and could not remember doing the scene even years later.

My favourite scene "Dorilla St"-Poor Eunice is told that the party has been changed to this address. I remember my daddy laughing so hard when she went up those rickety steps that tears were in his eyes. So I hope some of you will give this film a look especially if you need a good laugh. Oh and because of this film, Mel Brooks hired Madeline Kahn and Liam Dunn for his film "Blazing Saddles" 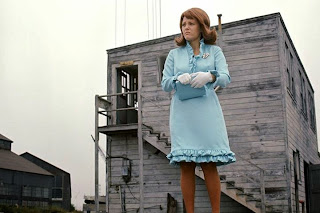