On recommendation, I recently looked into Smartling, a translation software company, that helps businesses connect with their audiences by translating the many languages out there so people get more connected. It got me thinking about foreign films and how they change when Americans remake and transform them. So I thought I'd write about the film "Shall We Dance."

I decided on the film "Shall We Dance?" Not the 1936 film with Fred Astaire and Ginger Rogers which is great, but the Japanese film made in  1996 and then remade in the States in 2004.

So first up is  the Japanese film 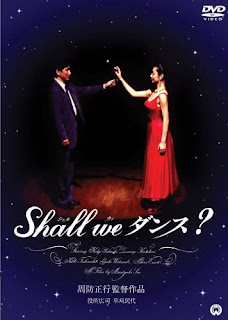 I have to say I simply loved this film. It was enchanting and ethereal. The basic plot is a happily married man who has a wonderful wife, a teenage daughter and a great job but somehow feels lost. On his way home, standing at the train station he sees a beautiful young woman stare out the window which happens to be a ballroom dance class. He is taken with this woman and her sadness and so, with great hesitation, he enters her world and starts to learn how to ballroom dance. There are a myriad of characters, my favourite being the audacious man who works with the main character but, on the ballroom stage, he lets loose with a fake wig and a smile that can blind you. Another character is the tough and blousy woman who is brash, loud and slightly nutty. I love her. There are scenes of quiet beauty and it shows how the Japanese are careful in wanting to take on Ballroom since it goes against their customs. I found it wonderfully played, sweet and intelligent. 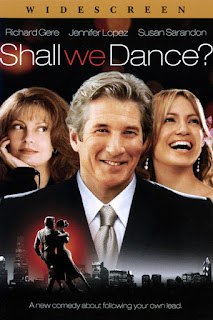 This is a nice remake. It is sweet but it falls short of the brilliance of the original film. It is simply more....American. The plot is basically the same but the ending shows more of a Hollywood ending to all the characters and so is not quite as realistic as the great Japanese film (the Japanese film also has a happy ending). Richard Gere does a solid performance but I longed for the performance by Koji Yakusho who played the lead in the original film. They each played to their strengths. Naoto Takenaka is great as the wild guy with the wild hair who loves to cha-cha but is so conservative at work with his fellow dance pal. Stanley Tucci, in the remake, is also just great in this same role and I love both of them. I love Stanley Tucci in just about anything he does.  Tamiyo Kusakari plays the winsome, sad professional dancer in the original and one can't help but fall for her graceful style. She conveys elegance and aloofness quite well. Jennifer Lopez can't carry the same part in the style Tamiyo did.  Cool elegance and aloofness does not seem to go with J-Lo especially when one always sees her pursed fish pout everywhere and her booty in your face every 10 seconds.  I enjoyed seeing Susan Sarandon and Richard Jenkins who almost stole every scene he was in. The blousy woman in the remake blew it as far as I am concerned. She made her character one dimensional for the most part where the actress in the original made her very moving and one had great empathy for her.

Overall I can't say to forget to see the remake because it is fun and nice but where the remake is a good film, the Japanese original leaves one wanting more and it is a superior film worth seeing.
Posted by Birgit at 5/29/2015