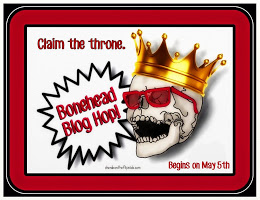 Face your fears! Nope, not in writing, but in some boneheaded thing you said or did and share it with others who have no problem sharing our faux pas. It is  always on the 5th day of the month and is hosted by Diana Wilder at Diana Wilder...About myself, By Myself and Cherdo at Cherdo by the Flipside.

So this was "Let's piss of your boss" month. My boss is as exciting as watching paint dry. He actually reminds me of the Warner Bros cartoon of the frog that drives everyone he meets crazy. When he is alone with one said person, the frog sings and dances but as soon as someone else may see him, the frog stops and just lets out one long "ribbbiiiitttt). I say "Good morning" and his response is ...."Yuuuup".

I am a Credit Counsellor and we deal daily with clients that often must be sent to a trustee for bankruptcy or a Consumer Proposal. The trustees make money and so for years, they have taken us out for dinners. This has been going on for as long as I have worked there which is 24 years. Well, our boss told us in a meeting that this one trustee has not been sending the same amount of people to us as we have to them. They also lumped us in with those dreadful debt settlement places and bad mouthed us on their website. He informed us we are no longer dealing with that one trustee.

Now, in the past our boss did not like us going out for dinners but as long as it was after hours he was, begrudgingly, fine with it.  Right after the meeting, my fellow counsellor and I get an e-mail from the trustee wanting to go to dinner. Can you hear the resounding thud! The other counsellor and I decided to think about what to say and how to state we can't go out for dinner any more.

What was this blond bimbette to do...oh yes-be too honest that's what and have her brains up her ass! I wrote a very nice e-mail stating we are no longer able to go for dinners due to the issues mentioned above. Can you hear that certain brown smelly stuff hit the fan?

Yup they called my boss and then the next day, the one trustee came to the office to speak to our boss who then thanked me for opening my mouth and placing him under the bus (my brother put it like this). I apologised to my boss realizing that I should have just sent the e-mail to him without responding. Oh wait! That would have been the intelligent thing to do but I wanted to get into some method acting and channel Chrissy from Three's Company so I sent the %$#! e-mail. The other counsellor told me not to feel so bad because I showed it to her before I sent it and she thought it was fine since we always dealt with the dinners before.

Regardless, I also had my performance appraisal and he listed that I was too blunt but being German I can't help it. I wasn't going to correct him and say I am Canadian of German descent. He also looked right at me when saying that if the other counsellor becomes manager here after he goes and keeps her files there is no reason to have another counsellor so that made me feel rather ill. I think I put a big bull's eye on my butt. So that is my bone head move for the month.