It is the 3rd week of January...people are saying they are sick of the cold. I have news for them...It's January, People! December was unusually warm and now we are in the midst of cold and some snow and people, here, are complaining. Here's an idea-move or suck it up! Embrace the weather, walk in the snow, make a snowman or an angel and then have some hot chocolate. If we still have the exact same weather in March, then bitch away but, until then, enjoy the wonders of nature. This is my non-judgemental rant for the day:)

Onward to Thursday Movie picks where, over at Wandering Through the Shelves, one can find what everyone else has picked for this week's theme-Airplane movies. Oh there are so many to choose from and I have to admit I love the movie, "Airplane,"  and all the sequels because they are so funny but I didn't choose them. Here are my 3... This is the first film to win Best Picture at the very first Academy Awards. I believe it won due to the great battle scenes in the air since over 300 pilots were used not to mention 3,500 infantrymen from the army. William Wellman, the director, was a veteran of World War 1 and was not only part of the French Foreign Legion but an accomplished flier of the Lafayette Escadrille. He was truly a no-nonsense director who created amazing fight scenes that we actually see as documentary footage about World War 1. It stars Clara Bow, who, she herself, thought she was just arm candy, with Richard Arlen and Charles "Buddy" Rogers as the 2 pilots. Arlen was also a flying veteran but Buddy Rogers was taught how to fly for this film so the camera could be with him in the airplane.  These 2 men, once great friends, are now antagonists because they both love the same woman, Bow. They both end up in the Great War and both fight at the famous Battle of Saint-Mihiel. Gary Cooper has a tiny part in this film which jump-started his career. Clara Bow had a great time off screen with many of the extras and Cooper. One day I will read about the making of this film in detail. Now I haven't seen the remake because I rolled my eyes when they placed in the token female, besides, this film has Jimmy Stewart and he flew a bomber many times over Germany in World War 2 so he knows a thing or two about flying! This movie takes place in Africa, when the plane carrying bunch of men to work in the oil fields, crashes in the Sahara desert. You not only get to learn about these men but about survival. Their only chance is a arrogant German(of course) figuring out how to get the plane to fly before they all die. The only gal in this movie is a mirage-Barrie Chase, doing a sexy dance. This is an excellent film about men, the desert and that hunk of junk called an airplane. 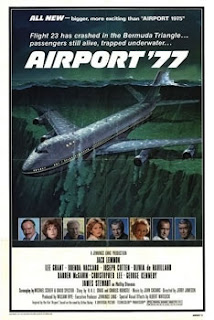 First, there was Airport with Burt Lancaster, then Airport '75 with Charlton Heston (Watch this hoot and then watch Airplane!) the 3rd one is Airport '77. In the 70's there were many disaster films-they were big! I love them all with all their campiness and this is another fun one with a huge cast from Jack Lemmon, Olivia De Havilland and Joseph Cotton to James Stewart, Christopher Lee and Lee Grant. Good ole George Kennedy is in all 3 playing the same role-gotta love that man:) It starts with 2 hijackers wanting to commandeer the plane because of all the priceless art on board. They knock out the Captain, gas the passengers to sleep (not be killed), and promptly crash the plane in the Bermuda Triangle. The passengers are, mostly, ok except they are now under water and, since they were off course, the Navy is not looking in the right place. How will they ever survive? You will have to watch this fun film to find out.

What 3 movies would you pick?